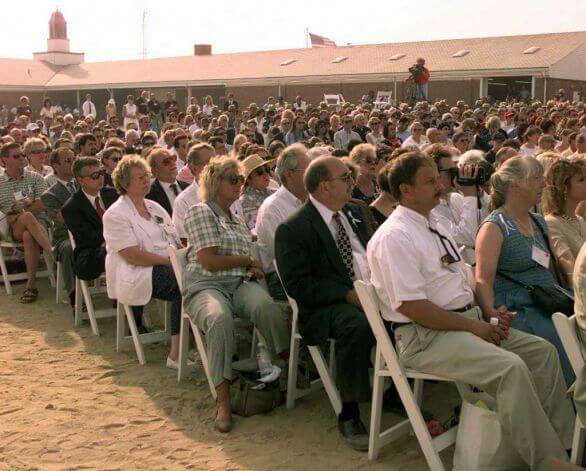 This past Sunday marked the 15 year anniversary of the tragic crash of TWA Flight 800 near East Moriches, New York. The Paris-bound flight exploded shortly after taking off from Long Island on July 17 in 1996.

According to Huffington Post, on Sunday friends and families of the 230 people killed in the crash commemorate the 15 year anniversary with a quiet beach gathering. Only 12 minutes after taking off from Kennedy International Airport on that tragic day, the plane exploded crashing into the water off Long Island.

Following the crash the FBI launched a huge investigation into the reason behind the sudden explosion. Many feared the plane had been the target of some sort of terrorist attack involving a bomb or a missile. Investigators alongside Navy divers spent 16 months searching the wreckage pulling both bodies and pieces of the plane from the bottom of the ocean.

Investigators concluded that the there was no terrorist plot and the plane went down due to the fact that upon takeoff a piece of the plane had fallen off. The National Transportation Safety Board concluded the plane was destroyed when a center fuel tank explosion caused by a spark from a wiring short-circuit that ignited vapors in the tank.

According to the Washington Post, Heidi Snow Cinader, 39, started the group, AirCraft Casualty Emotional Support Services to deal with the tragic loss of loved ones. Since starting the group nearly 15 years ago, Cinader has worked with countless families involved in plane related crashes on her 24-hour hot line. She has trained nearly 250 mentors and aided countless families during times of loss.