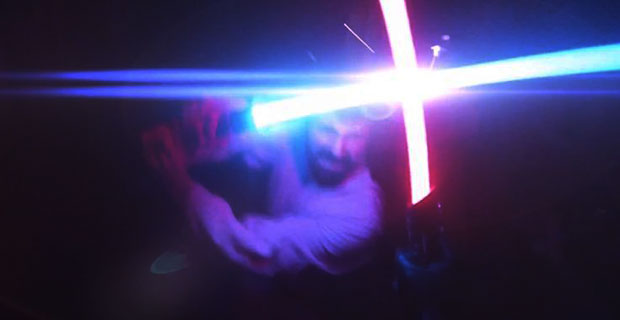 Star Wars. Iconic. To love it is both nerdy AND masculine. That hasn’t happened since Strat-O-Matic.

The lightsaber. An imaginary, yet awe-inspiring technological wonder. Like the hover-skate-board. Or Rosie The Robot. Or an Airbus that doesn’t catch on fire.

Lightsaber battles. Awesome. Electronic swooshes and pulses climaxing with the ominous shock of saber-on-saber blocks, coupled with acrobatic lunging, tumbling and dodging, with a telekenetic feat of the Force thrown in from time to time for good measure.

Reminds me of my divorce!

Many a boy (and probably a few girls who back then we thought were meh and too Tom Boyish but later grew up to be HOT and now WON’T ANSWER ANY OF MY TWEETS DAMN YOU ALYSSA MILANO) have whipped out a Wiffle Ball Bat, flailing in a chaotic recreation of epic Lightsaber battles from the various Star Wars films (though it always irked me that they had the cool two-sided red-Darth-Maul-saber thing used in the later episodes, but then not in the earlier episodes, which were really the later episodes. Like, why did they stop producing that weapon in the future… What happened? Was it recalled? Made from horse meat?)…

Unfortunately, (because we know how complete this would make people’s lives) there was never any way to really visualize what it was like to Lightsaber battle to the death.

Well now, thanks to The Stunt People, you can.

Thus ends my long buildup to a short, but clever and pretty cool video. Now watch.