Montauk: The End of the World, And You’ll Feel Fine 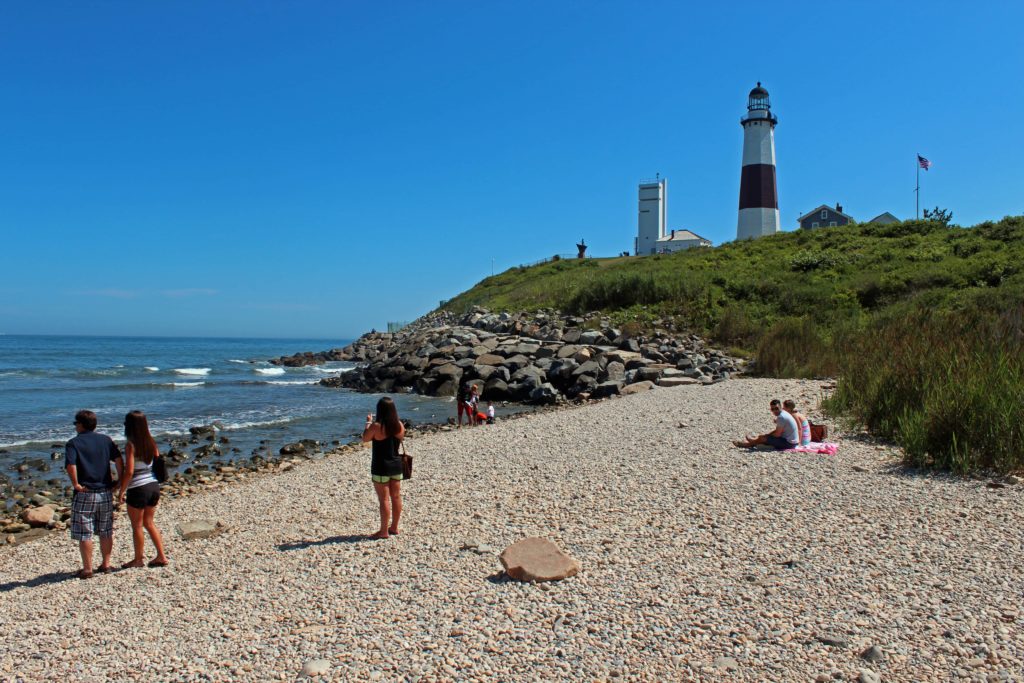 Few Long Island destinations are as singularly impressive as Montauk, the easternmost point in New York State, located on the tip of the South Fork.

As one stands at one of Montauk’s many scenic spots, staring out into the seemingly endless Atlantic Ocean, it truly feels like you’ve reached the end of the world. And honestly, that’s just fine. There’s nowhere else you’ll rather be at that moment.

Already home to multiple native tribes when the Dutch arrived in the early 1600s, Montauk has a long history as a colonial outpost, a center for agriculture and seafaring, a playground for the rich, and a strategic location for the U.S. military. Claiming more world saltwater fishing records than any other port on the planet, today it remains a bucket-list spot for surf anglers and is home to the state’s largest commercial fishing fleet. And for the countless visitors who don’t arrive with rod and reel, there’s also miles of public space — including long stretches of idyllic beach — just waiting to be explored.

Since for most of us, it’s a fairly lengthy drive to actually reach Montauk, you’ll want to make the most of your time there. Here are some highly recommended hangouts:

HISTORY WITH A VIEW

No trip to Montauk is complete without a visit to the Montauk Lighthouse National Historic Monument (2000 Montauk Hwy., 631-668-2544, montauklighthouse.com), towering proudly above Montauk Point. The first and oldest lighthouse in New York State (fourth oldest active in the U.S.), it was authorized in 1792 by the Second Congress, under President George Washington, and completed on November 5, 1796. It still aids navigation today, while providing visitors with breathtaking views of Block Island and the Atlantic Ocean. There’s also an excellent museum inside its c. 1860 keepers’ house, featuring historical documents and photographs, whaling artifacts and more, as well as a gift shop inside its Conway Visitor Center.

But your exploration of Montauk history needn’t end there. Another essential stop is Second House Museum (12 Second House Rd., 631-668-2544, montaukhistoricalsociety.org), the oldest structure in the area, built in 1746 and expanded in 1797. Once the home of one of three area shepherds (each with their own house) who collectively tended what was once a vast pasture, Second House now delights visitors with its tranquil gardens and a museum focused on local history, particularly Montauk’s Native American past. It’s temporarily closed for renovations, but is expected to reopen sometime in the near future.

And for a truly unique experience that fuses history with pop culture and nature, spend a day exploring Camp Hero State Park (1898 Montauk Hwy., 631-668-3781, camphero.net), occupying a stunning 754 oceanfront acres, including a portion of the former Montauk Air Force Station, decommissioned in 1981. Conspiracy rumors regarding the base have circulated for decades — including tales of strange Cold War-era time-travel experiments conducted underground in a vast network of tunnels and bunkers — partly inspiring the hit Netflix horror/sci-fi series Stranger Things. You can see remnants of the facilities today, notably a massive radar tower that still stands, while also enjoying picnic areas, a beach, and trails for hiking, biking, horseback riding and cross-country skiing, plus world-class surf fishing.

Fishermen aren’t the only sportsmen who drool at the thought of a Montauk vacation. We’d be remiss to not mention that for golfers, there’s Montauk Downs State Park (50 S. Fairview Ave., 631-668-3781, parks.ny.gov/parks/29), including an 18-hole championship course, driving range, tennis courts, swimming pool and restaurant. Originally developed in 1927 by Carl G. Fisher as a private course, everyone can now enjoy Montauk Downs, consistently rated as one of America’s top public golf courses. Be prepared for a challenge, though: The course is one of the windiest locations in the country and weather conditions can make the play different each day.

As you might imagine, all forms of saltwater pursuits are the dominant activities in Montauk. For surfers and bodyboarders, paradise can be found at the always-popular Ditch Plains Beach (18 Ditch Plains Rd.), where one can typically hang ten and find great waves. Multiple local surfing businesses offer gear rental and lessons at Ditch Plains, and there are public restrooms and outdoor showers, as well as food trucks. Parking can be tricky, since it is limited and by permit only, so it’s better to park at the nearby Montauk Lighthouse and walk.

You may, however, prefer to watch the surfers, rather than actually jumping on a board yourself. In that case, spend an hour or two hiking the trails at Shadmoor State Park (900 Montauk Hwy., 631-668-3781, parks.ny.gov/parks/16), which lead to majestic cliffs overlooking Ditch Plains. It’s a relatively quick (10 to 15 minutes) and easy walk, and the views from the top are some of Montauk’s best.

Another great option for enjoying the Montauk beaches, without paying excessively to do so, is to visit Hither Hills State Park (164 Old Montauk Hwy., Montauk; 631-668-2554; parks.ny.gov/parks/122) which costs just $10 per car, or is free with the Empire Pass. There’s a lovely beach and playground, a huge oceanfront campground, biking and hiking trails and the popular “walking dunes” of Napeague Harbor. It’s also a beloved surf-fishing spot that’s open year-round to anglers.

After basking on Montauk’s vast stretches of pristine, unspoiled beachfront, you may feel the urge to return to civilization, even if just briefly. For this purpose, and perhaps to consume some fine seafood, head over to Gosman’s Dock (W. Lake Dr, 631-668-2549, gosmans.com), founded in 1943 by fish vendors Robert and Mary Gosman at the entrance to Montauk Harbor. You’ll love the oceanfront ambiance of the place, as well as the variety of shopping and dining options, including a fish market and the ever-popular Gosman’s Seafood restaurant, once just a humble dockside chowder stand.

In addition to filling up on lobster rolls and steamed clams, you may be inspired by Montauk’s picturesque scenery to seek out an experience suitable for the silver screen, as you gallop along the shoreline on horseback. To make this fantasy a reality, visit Deep Hollow Ranch (8 Old Montauk Hwy., 631-668-2744, deephollowranch.com), the reputed “birthplace of the American cowboy” and oldest working ranch in the U.S., founded in 1658. The ranch offers trail rides for all ability levels, including waterfront rides along Block Island Sound, plus its Summer Pony Camp for kids aged 7 to 12. If you’re going to ride off into the sunset, this is the place to do it.