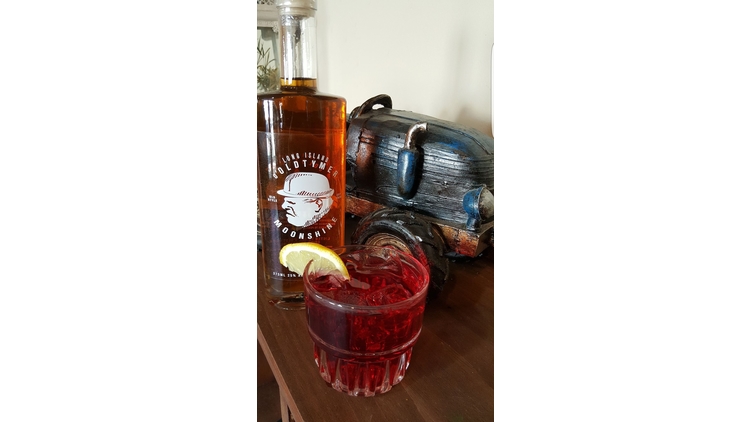 The Red Neck cocktail is as powerful as it is simple.

Known primarily for its small-batch whiskeys and flavor-infused moonshines, Twin Stills Moonshine Distillery in Riverhead shares more than just its spirits with its customers — there’s a legacy behind the brand.

“We have two 250-liter stills,” says Joe Cunha, who owns Twin Stills, a family owned and operated distillery, with his wife, Patty, and is the head distiller. “They’re handcrafted from Portugal. They’re small batch in the true sense of distilling.”

His grandfather distilled Grappa and various infusions of spirits in Portugal many years ago. After his grandfather passed away, Cunha decided to continue the legacy his grandfather had left behind by attempting to recreate some of the spirits he distilled.

For his products, he sources all his ingredients (including corn, grain and fruit) locally from a farm around the corner from the distillery called Zilnicki Farms, a fourth-generation family farm located in Riverhead.

Some of the distillery’s products include o’OldTymerWhiskey, made from Long Island corn and aged in American White Oak; Honey Moonshine, 100 percent moonshine infused with all-natural Long Island honey; Mixed Berry Moonshine, made from all-natural blueberries, blackberries, strawberries and raspberries; and Apple Pie Moonshine, one of Twin Stills’ bestselling products.

There are nine cocktails on the distillery’s cocktail menu, many of which call for the distillery’s Apple Pie Moonshine, marketed by Twin Stills Moonshine as “Momma’s apple pie but half the calories and twice the fun.”

Among the cocktails listed, one stands out for its simplicity: The Red Neck.

Easy to make, The Red Neck has two ingredients: Apple Pie Moonshine and cranberry juice. Mix both in a cocktail glass with ice and garnish with a lemon wedge.

Many customers describe the distillery’s Apple Pie Moonshine as “dangerous,” he says.

“It’s very, very smooth, and if you’re not careful, you could drink a bottle of it,” he says.