Long Island Beers to Help You Stay Warm in a Blizzard

By Bernie Kilkelly Posted on February 6, 2021 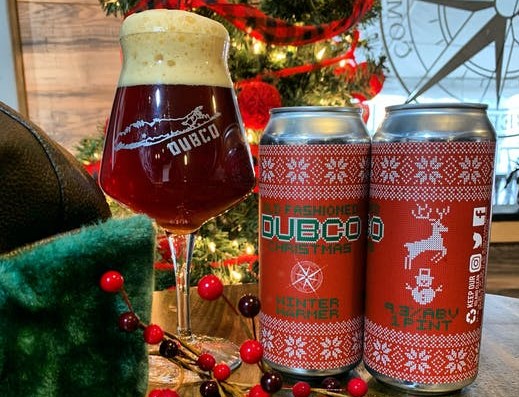 As the nor’easter raged on Monday, many beer lovers reached for hearty winter ales to warm up after shoveling snow or enjoying a sleigh ride. There are plenty of high alcohol craft beers on Long Island, with all kinds of beer styles brewed at double, triple and imperial ABV levels. But true winter ales, often called Winter Warmers, are notable not just for high ABV but also their rich maltiness and added spices.

Winter Warmers trace their origins to the British tradition of brewing robust, high alcohol beers to be enjoyed in the cold of winter, often with spices used in mulled wine like nutmeg, cinnamon, allspice and orange peel. The style became popular in the U.S. after Anchor Brewing in San Francisco brewed its first Anchor Christmas Ale in 1975 and Sam Adams introduced Old Fezziwig Ale in 1995, a rich brown ale brewed with cinnamon, ginger and orange peel.

Many of Long Island’s craft breweries feature seasonal winter ales, including several that have become longstanding favorites. Blue Point Brewing’s Winter Ale was one of the first seasonal beers introduced after the brewery was founded in 1998 and became available in 6-packs in 2005. This rich amber ale uses pale, Vienna, crystal and chocolate malts for robust flavors and weighs in at a warming 7.7% ABV.

Long Ireland Beer Co. brews its Winter Ale with five different malts including Honey Malts and Cararuby for a deep ruby-red color. The Riverhead brewery, founded in 2009, uses three hop varieties along with ginger, allspice and cinnamon for a spicy finish. With its full body and 7.2% ABV, this beer produces a definite warming effect. If you can’t make it to Riverhead, 6-packs are available at beer retailers and select supermarkets across Long Island.

Port Jeff Brewing, which will celebrate its 10th anniversary in October, has a winter seasonal beer on tap at its tasting room. The 7.6% ABV beer, Ice Breaka Winta Warma, is a full-bodied ale brewed with mulling spices, vanilla beans, molasses and brown sugar.

In Bay Shore, Destination Unknown Beer Company serves up its Old Fashioned DUBCO Christmas Winter Warmer, brewed with Crown Maple syrup, orange peel, demerara sugar and luxardo cherries. The beer is aged on bourbon-soaked oak and this year’s version brings the true Christmas spirit at 9.3% ABV.  4-packs are available for takeout or can be ordered online for curbside pickup or delivery.

One of Long Island’s newest breweries, Tradewinds Brewing, is featuring seasonal Winter Red ale at its Riverhead tap room that opened in 2020. This double IPA, with a warming 7.8% ABV, was dry hopped like a classic West Coast IPA using Cascade, Centennial, Chinook, and Columbus hops to give a piney flavor that balances the rich maltiness.

While we may not have another blizzard the size of the one this week, we can count on Long Island-brewed winter ales to help us weather any storm.

Bernie Kilkelly is the editor and publisher of LIBeerGuide.com, the authoritative guide to finding and enjoying great beer on Long Island. He has been writing about and enjoying craft beer, breweries and homebrewing on Long Island for over 30 years. Reach him via libeerg[email protected]