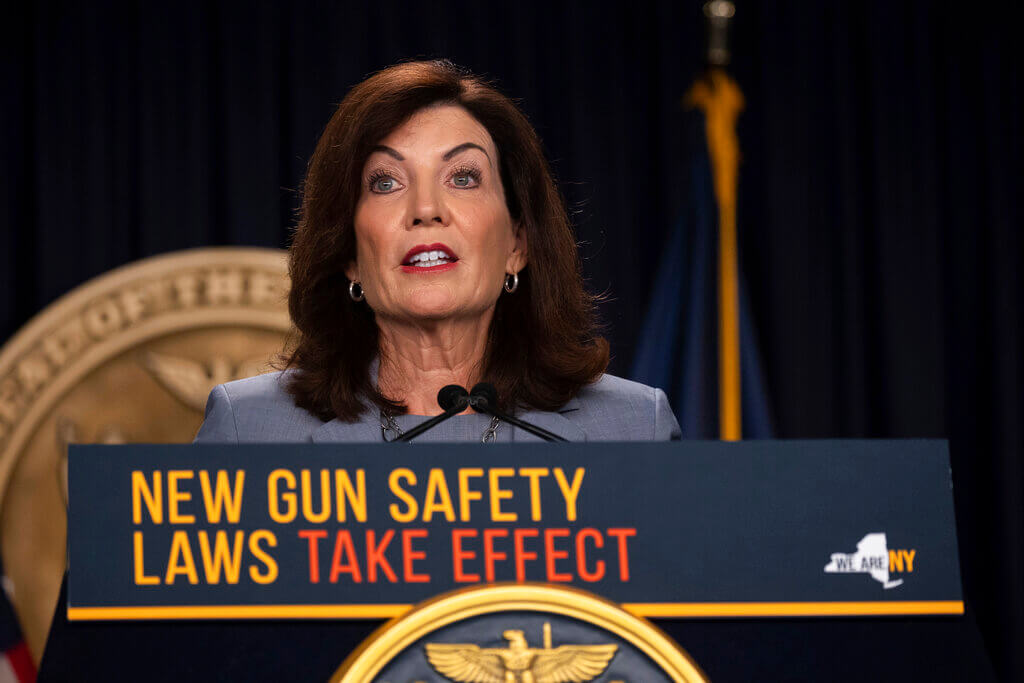 New York Gov. Kathy Hochul speaks during a news conference about upcoming “Gun Free Zone” implementation at Times Square, Aug. 31, 2022, in New York. Hochul in recent days announced the endorsement of several law enforcement unions and released her own ad with a public safety message titled, “Focused on it,” to remind voters that she toughened the state’s gun laws.
AP Photo/Yuki Iwamura, File

A federal judge has blocked a provision of New York’s new gun law that bans carrying firearms in houses of worship from taking effect in parts of the state.

U.S. District Judge John Sinatra Jr. sided with two Buffalo-area clerics and gun rights organizations who had sued and sought a hold on enforcement of the law until the judge decides the case on it merits.

The preliminary injunction issued late Thursday extends a temporary hold Sinatra ordered last month. The order to stop enforcing the law applies directly to the prosecutors in Erie and Niagara counties and to the state police, who are defendants in the lawsuit.

“(T)he nation’s history does not countenance such an incursion into the right to keep and bear arms across all places of worship across the state,” Sinatra wrote.

New York lawmakers rewrote the state’s gun laws this summer after the U.S. Supreme Court invalidated the state’s old system of granting permits to carry handguns outside the home. Among the provisions of the new law was a ban on guns in places of worship and other locations deemed “sensitive.”

A spokeswoman for the state attorney general’s said they were reviewing their options.

In a separate lawsuit, the state is appealing a federal judge’s order to put a hold on several of the state’s new licensing rules for carrying handguns in public. That judge’s order is being stayed on appeal.