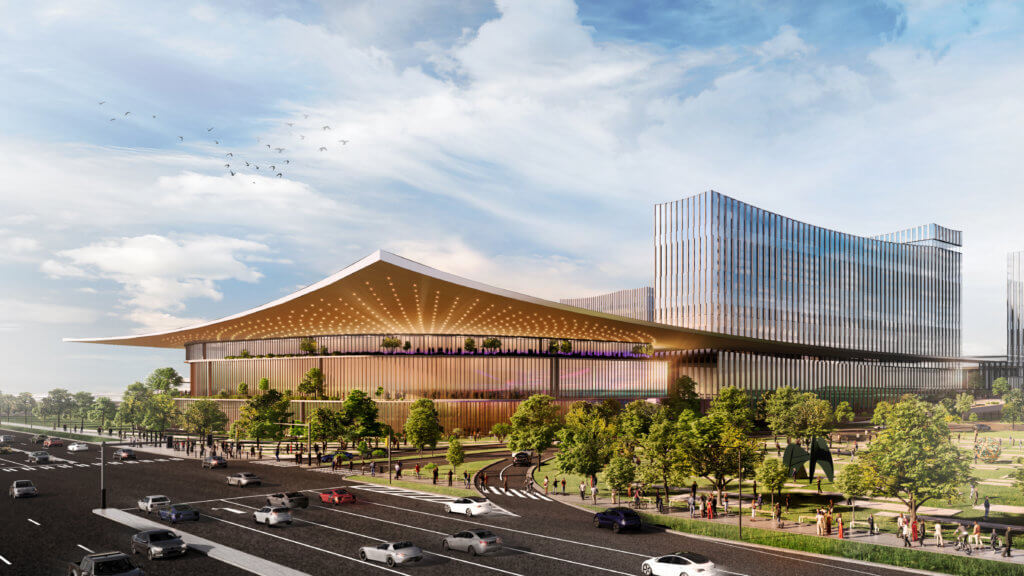 Call it the Nassau Colisino.

Las Vegas Sands has proposed turning the largely dormant Nassau Veterans Memorial Coliseum in Uniondale into a casino as New York State considers applications to open three such facilities in the downstate region.

“We strongly believe Long Island can be home to one of the region’s great entertainment and hospitality developments,” said Robert G. Goldstein, the company’s chairman and chief executive officer. “We are ready to work in a serious and transparent manner with the local community in an effort to bring an exciting new industry to Long Island.”

The announcement came about a week after the state Gaming Commission issued a Request for Applications for three Class III gaming facilities — full-fledged casinos with live dealers — with a $500 million fee for each winning applicant. More are likely to apply ahead of the state’s Feb. 3 deadline.

The three downstate contracts were among seven for casinos statewide that New Yorkers voted to allow in a 2013 referendum that amended the state constitution to approve non-tribal casinos for the first time. The proposal was largely supported on Long Island with voters approving it by two-thirds of the vote. Fifty-seven percent of voters statewide gave the state the go-ahead.

If it advances, the coliseum would be the first Vegas-style casino on LI. Currently, the Island’s only casino, Jake’s 58 in Islandia, is a Class II gaming facility that is limited to slot machines and electronic gaming tables — no live dealers. The Shinnecock Indian Nation is currently in the process of building the Island’s second Class II casino on its Southampton territory. Nassau briefly considered building a Class II facility in nearby Westbury before shelving the plan amid widespread community opposition.

The county-owned coliseum has remained largely unused, except for the NBA G League’s Long Island Nets and various expos, since the coronavirus pandemic shutdown of 2020, which prompted billionaire Mikhail Prokhorov and his Onexim Sports and Entertainment to cancel its lease on the arena. The setback came three years after the coliseum reopened following a $260 million renovation to the 416,000-square-foot facility, one of several failed attempts to keep the NHL’s New York Islanders at the team’s original home. The team now calls the new UBS Arena in Elmont home.

The Sands proposal is billed as a multi-billion-dollar flagship hospitality, entertainment and casino project, which would include outdoor community spaces, four and five-star hotel rooms and a world-class live performance venue. It would also feature celebrity chef restaurants, experiential events, convention space, a luxurious day spa, swimming pool and health club, and a variety of other entertainment programming. Casino gaming would take up less than 10% of the project’s total square footage, the company said. To advance its vision, the company has entered into agreements to purchase the long-term lease of the 80-acre site.

“The plan envisioned by Sands is a once-in-a-generation opportunity to create the kind of world-renowned entertainment and hospitality destination that has been sought after by Long Islanders,” said Scott Rechler, CEO and chairman of RXR Realty, which is located across the street from the coliseum and has been involved in the redevelopment plans.

The company touted the tax revenue and job creation potential of the plans and goal of making the building environmentally sustainable.

“Our goal will be to ensure that our supply chain is fulfilled from small businesses, minority-owned, women-owned as well as veteran and disabled entrepreneurs based locally so that our surrounding communities are central and fully participating in the success of this project,” former New York State Gov. David A. Paterson, who is a Sands senior vice president.

Nassau County Executive Bruce Blakeman told reporters that he doesn’t think the current arena would be a viable option for the planned casino.

“It would be my preference,” Blakeman said, “that if there were a way to restore and keep the Coliseum, I think from a nostalgic standpoint, and from a historical standpoint… I think that would be an added bonus.”

“As this process unfolds during the next several months, it is imperative for Sands Resorts to conduct extensive community outreach and then incorporate the feedback they receive into their proposal,” he said. “I’ve heard from many residents that oppose the casino aspect, and although I agree with that sentiment based on past casino projects, it’s important to listen to everyone so we can move forward together with all perspectives in mind.”