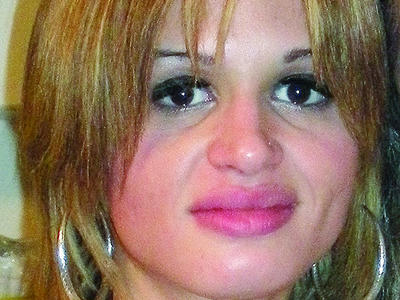 The mother of a woman whose disappearance led to the discovery of the Long Island Serial Killer’s dumping ground has been fatally stabbed by one of her other three daughters in upstate New York, authorities said.

Sarra Gilbert, 27, was charged with second-degree murder in the death of her 52-year-old mother, Mari Gilbert, who was found dead in Sarra’s Ellenville apartment at 2:15 p.m. Saturday, Ellenville village police said.

“Officers observed through the window what appeared to be a body on the floor,” Ellenville Village Police Chief Philip Mattracion told reporters Monday. When they entered the apartment, they found Mari on the living room flood and Sarra in the kitchen with blood on her clothing, he said. An autopsy determined that she died of multiple stab wounds.

Authorities also charged Sarra with criminal possession of a weapon. After her arraignment, she was ordered held without bail at Ulster County jail. She is due back in court Tuesday. Investigators believe they have recovered the weapon, but Mari’s exact cause of death was unclear, Mattracion said. He added that the investigation is continuing.

Sarra’s sister, Shannan Gilbert, was an online escort who was reported missing from her last client’s home in Oak Beach in 2010. Six months later, police were searching for Shannan when they found the dead bodies of four other online escorts believed to be the victims of a serial killer who dumped them on the side of Ocean Parkway in nearby Gilgo Beach.

Over the following year, investigators eventually found a total of 11 sets of human remains along the parkway, including Gilbert’s, although only half of the remains have been identified and it’s unclear if their deaths are connected.

RELATED STORY: Chronology of a Mystery