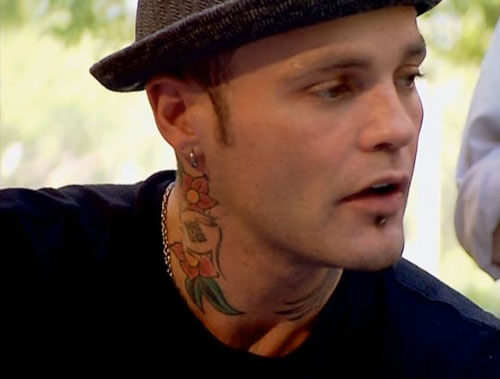 Former Crazy Town singer Seth Binzer and star from VH1 “Celebrity Rehab” and “Sober House” is reportedly in a coma in a Los Angeles hospital. Shifty was admitted to the intensive care unit last week.

According to TMZ Bizner (AKA Shifty Shellshock), 37, entered the ICU last Thursday after he lost consciousness. He is currently in an unresponsive state. At the present time there was no information regarding what sent him to the hospital, but unidentified sources who claim to be close to the singer assume it to be drug-related.

Shifty has been scheduled to appear in court this week for a pre-trial hearing dealing with a cocaine-related arrest in February. He was arrested last March when authorities responded to a domestic violence call. When they went to the scene of the disturbance, officers realized Shifty had warrants out in unrelated cases.

Shifty Shellshock is one of the founders the rap-pop group Crazy Town. They made it big with their super catchy single “Butterfly”. Even though “Butterfly” was a huge hit, Crazy Town was unable to replicate the same success as their debut album, The Gift of Game. Their sophomore album, Darkhorse, didn’t sit right with fans who preferred their bubbly single “Butterfly” over the more rock-oriented Darkhorse album.

Shifty attempted a solo career in 2004, but failed. In 2007 Crazy Town was planning on getting back together, but they never actually made any music together.

The troubled singer ultimately became more famous for his personal life than his music. He checked into the first season of VH1’s “Celebrity Rehab” show in 2008, went back for the end of the second season after he was unable to kick his drug habit. In an attempt to stay straight Shifty even went on to star in the spin-off series “Sober House,” but viewers watched him stuggle through multiple relapses.

A spokesperson for VH1 wishes Shifty and his family the best.

Check out Shifty on “Celebrity Rehab.”