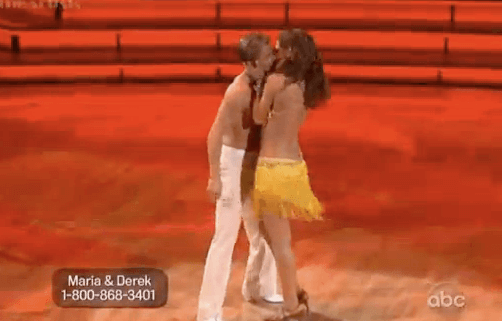 In previous weeks, “DWTS” contestants Maria Menounos and Derek Hough were rumored to have kissed during a performance but this week, there was no doubt about it, they definitely did.

During their fifth performance on “Dancing With The Stars” the two locked lips for all the world to see.

“Last time I failed basically, so she gave me a chance to redeem myself,” Hough told US Weekly.

Before heading onto the floor the two danced with audience members like Dr. Drew Pinsky, who Maria later thanked for letting her “Attack” him.

The two gracefully danced until midway through their performance when Derek ended up shirtless, which proved irresistible for Maria who grabbed his face and kissed him.

The PDA-filled performance proved entertaining for the crowd who cheered them on as they approached the judges. The judges too enjoyed the performance.

“Do you want me to get you a room? Can I join in?” “DWTS” judge Bruno Tonioli joked.

“I’ll tell you what I thought. Two things were revealed out there. Derek’s body and your talent. You are a wonderful dancer,” said judge Len Goodman.

One judge wasn’t so impressed with the duo’s performance, Carri Ann Inaba said, “I don’t think you needed the kiss. I think that was a sell out. Dance is about the illusion of the passion.”  Inaba did however, praise Maria’s dancing, “That was hot. Maria you are fantastic.” Your open body is so still and elegant. You had everything magic going on,” she said.

The number earned them an impressive 27 out of 30 score. Check it out.