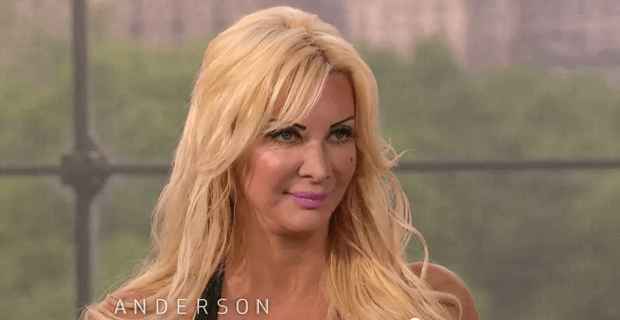 After having “Barbie Mom” appear on his daytime talk show, Anderson Cooper could not stand to talk to the “dreadful” mom for an entire session — he had enough halfway through the interview.

Sarah Burge, best known as Barbie Mom, is a UK mother whose claim to fame is spending loads of money on plastic surgery. She’s the same lady who instructed her 6-year-old daughter to pole dance and gave her a voucher for a breast enhancement when she turns 18.

In an attempt to understand why a woman would act in such a strange manner with her daughter, Anderson had Barbie Mom appear on his show — a choice he later regretted.

Anderson effectively ended the interview. But not before Barbie Mom tried to explain her, let’s say, unconventional parenting techniques.

“My daughter is a professional dancer, all my children are professional people and she perpetually sweated on her forehead, and so the best answer for that was a shot of Botox and I didn’t actually give it to her,” she explained when asked why she would let her 15-year-old get Botox.

Anderson really let her have it before he ended the interview.

“You know this is about publicity,” he said. “You don’t put a 7-year-old on a poll and have her photographer and it just doesn’t happen to wind up in the paper. You contact the British tabloid. You contact the papers and let them know about this stuff.”

Given the audience’s reaction, Anderson’s probably not going to be hearing any negative feedback for kicking Barbie Mom off his show.

Look at the clip to see why Anderson got so riled up: