An Inside Look at The Islanders’ New Arena 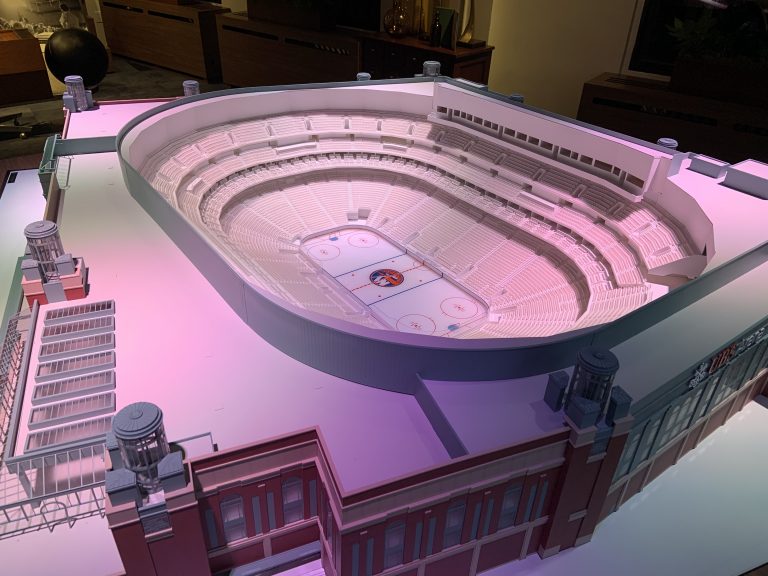 Over the past 35 years, you can count on one hand the number of times there has been such reasons for optimism around the New York Islanders.

They’re in the Eastern Conference Finals for the first time in 27 years, they have some of the best leadership in the NHL from GM Lou Lamoriello down to head coach Barry Trotz, and they have a state-of-the-art arena under construction that will finally provide them with a 21st-century, hockey-first home at Belmont Park.

During Game 2 against the Lightning Wednesday night, Islanders owner Jon Ledecky invited amNewYork Metro to the UBS Arena Preview Club, offering the newspaper a first glimpse at the team’s future home, while providing an in-depth look alongside Oak View Group CEO, Tim Leiweke, whose company is overseeing the building’s construction.

The $1.5 billion project is set to become the premier arena in the New York metropolitan area to catch a hockey game — or a concert — as Leiweke and Ledecky did incredible amounts of homework in designing UBS Arena.

“We all collectively did an analysis on what worked and what didn’t work. The players helped design with Lou and Barry the 23,000 square-foot campus,” Ledecky told amNewYork Metro. “It was really a combination of Tim and the fact that I was traveling around the Coliseum vs. sitting in the owner’s box, talking to hundreds of fans. They all wanted the same thing: An intimate, tight, great lower bowl, and an intimate environment.”

Such a setup will be reminiscent of the team’s current home, Nassau Coliseum, which provided some of the best sightlines and atmospheres in hockey, but lacked modern-day amenities for a pro hockey team.

To ensure UBS Arena met those standards, Ledecky traveled across the country and toured numerous arenas to replicate the best aspects from each.

“There’s a lot of learning and as I call it, let’s be great thieves,” Leiweke said. “We don’t have to be the smartest guys in the room, we just have to be good at taking other people’s ideas and putting it to work here.”

At this point, the renderings of the arena have become museum-worthy works of art for Islanders fans, who are eagerly awaiting their new home’s opening for the start of the 2021-22 season. But there are some other things to look for other than just the in-game experience — especially an unnamed restaurant that Leiweke raved about.

“This restaurant-bar that we’ve created in the building, and I’m not going to give too much of this away, but there’s a spot in the building that stares straight at the stage. Honestly, I’ve been doing this for 40-plus years, I’ve built lots of arenas, we’re in the middle of building six right now. This is singularly the greatest place I’ve ever seen to either watch a concert or a hockey game,” Leiweke said. “The restaurant, the decorations, the special touches, the linen touches, the food we’re going to serve, this is my favorite place in the building. And when people see it, I think they’ll know why it might be, maybe, the single best space in any arena I’ve ever seen to see a live event.”

For Ledecky, it’s a special section in the arena without seats that allows fans to stand and mingle, making hockey games not just vital for a sports fan, but “a happening” for all who attend.

And if they do have to leave their perch or their seats for refreshments, they won’t miss a beat.

“We’re going to have eight bars where you can actually see the action while you’re grabbing a drink. That’s something you don’t see in a lot of arenas,” Ledecky said. “You have to go through the concourse, you have to stand on line, maybe there’s a TV you can see, and half the time you go — I know when I’ve been a fan — half the time I go to get a Coke or a drink, I miss the damn goal. I think having something like that is fan-friendly.”

Before UBS Arena can be completed and experienced, the Islanders still have one more year to get through, which doesn’t provide them a guarantee of their former home, the Nassau Coliseum, right now.

Mikhail Prokhorov got out of his contract and his debt earlier this summer, which was taken over by Florida developer Nick Mastroianni II. While he searches for a new developer for the building, Leiweke and Oak View Group have already put in a pitch to do just that, allowing the Islanders to play the 2020-21 season at the Coliseum before heading out to Belmont.

There has been no clarity on the situation as of yet.

“I hope Nassau works out. That’s where the Islanders should play their games. At the end of the day, we don’t want to be in a position where Nassau Coliseum’s future use is pitted directly against UBS Arena,” Leiweke said. “It’s a billion-dollar private investment, so hopefully, there’s a way where we can find a solution for everyone and I’m going to leave it at that.”

This story first appeared in amNY.com