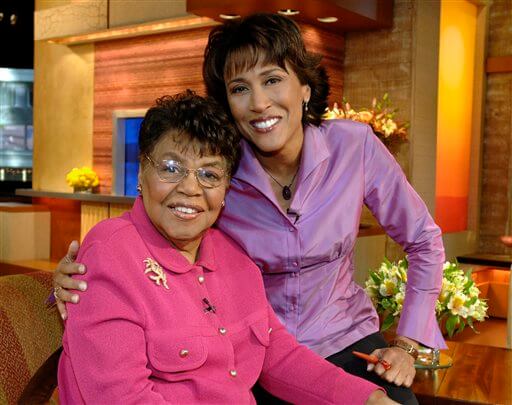 The mother of Robin Roberts, the popular host of ABC’s Good Morning America has died the network said. Her mother, Lucimarian Roberts, was 88.

Roberts, who was recently diagnosed with myelodysplastic syndrome, announced she would take an extended medical leave Friday so she could get ready for a bone marrow transplant. But she left one day early to be home with her mother.

“It is with deep regret and heavy prayer and reflection tonight that I write to tell you of the passing of Robin’s beautiful and inspiring mother, Lucimarian,” Good Morning America executive producer, Tom Cibrowski reportedly told the ABC staff in an email.

Roberts was with her mother in Mississippi when she died.

“Robin arrived home with her sister, Sally-Ann, forging through flooded and blocked roads to be with her beloved mother in time to see her,” Cibrowski said, referencing the floods caused by Hurricane Isaac.

Roberts mother was known throughout the Gulf Coast, according to reports.

The Associated Press reported that she was the first African-American to serve as chairman of the Mississippi State Board of Education. She also worked with other local agencies.

Roberts wrote on her Facebook page Thursday that she and her sister had arrived in Mississippi to be with their mother.

“We draw such strength from momma,” she wrote. “A CD of her favorite hymns is playing in her room. So thankful for my sister, Dorothy, and the nurses who have been caring for her. I will cherish these moments I have with mom.”