Rise of The Jack ‘O Lanterns Returns to Old Westbury

By Jonathan Vecchione Posted on October 20, 2014 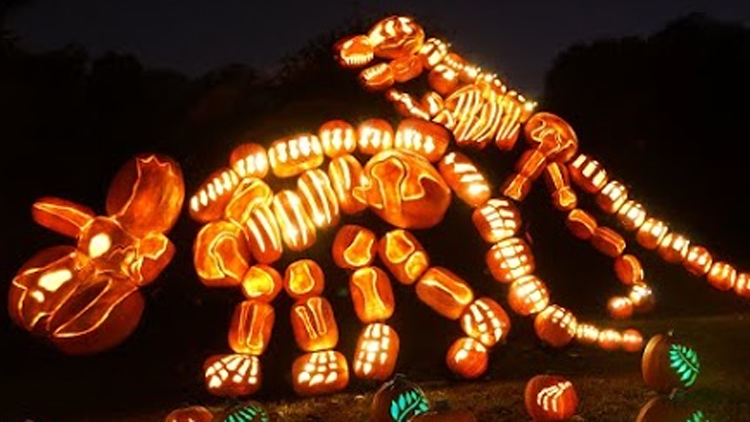 The Rise of the Jack O’ Lanterns, the annual festival of expertly carved and lit pumpkins, returned this weekend for a third time in the run-up to Halloween—wowing crowds along the way.

Organizers expect thousands of guests to navigate a quarter-mile-long path through Old Westbury Gardens decorated with more than 5,000 professionally carved jack o’lanterns created by artists from around the nation. The pumpkin-carving pros behind “The Rise” transform the gourds into images of sports legends, video game characters, movie stars—even full-scale dinosaur skeletons.

“One of the things I like about Halloween is it inspires people to be artistic in ways that they otherwise might not be,” Tom Olton, the expert carver and creative director of the event—which he runs simultaneously with another in California—told the Los Angeles Daily News. “It’s an artsy-driven holiday.”

Themes this year include: “New York City On The Rise,” featuring The Empire State Building and the Freedom Tower; “Video Games On The Rise,”  which includes scenes from Grand Theft Auto and Mine Craft; as well as “Gangsters On The Rise,” depicting likenesses of Tony Soprano and Nucky from Boardwalk Empire.

While carving the jack o’lanterns takes 10-person teams anywhere from 45 minutes for individual pumpkins to weeks on more intricate displays throughout the year, preserving them is a well-kept secret of Debbie Katz, producer of this year’s event.

Visitors are also able to watch the artists’ surgical precision in action as they take requests from the crowd. Travis Arthur, 4, of Huntington Station, shouted “Spider!” Seconds later, one of the artists grabbed a hand tool and began carving just that—mesmerizing the audience with the detail and speed of the carving.

Couples have particularly enjoyed the event. Last year, eight marriage engagements occurred on the scenic path, when suitors arranged to have the pros carve out special jack o’lanterns that read: “Will You Marry Me?” What happens this year is anyone’s trick or treat.