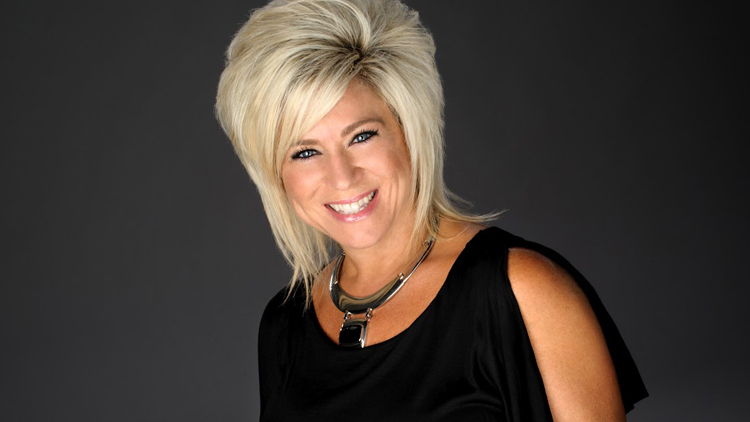 After my father died suddenly five years ago, I found myself sitting in the upstairs alcove of a high ranch in Kings Park that was decorated in gaudy crucifixes and adorable cherubs. Across from me sat the medium a friend had sworn by. A medium who had told my husband the day before that she’d been visited by my father and that he wanted to talk to me.

She wasn’t the first psychic medium I’d been to. And most certainly wasn’t the last. She described my father as a veteran (he was), who liked to cook (he did). She gave details about how he died, and described how he’d lived. The message she said he wished to relay to me resonated, quite deeply, but it was what she said to me as we were talking about my budding writing career that turned me into a believer.

“She gets it from me,” the medium told me my father had said. As a joke.

A wiseass even in the afterlife? That was what cemented the unbelievable truth to me that my dead father was right there in the room with me.

And so it was with an open mind that I attended Theresa Caputo Live! The Experience at the NYCB Theatre at Westbury on December 17. The packed house was rife with nervous laughter and quiet murmurs as the audience filed in an hour before she came onto Westbury’s iconic round stage, set with a high table draped in white cloth, holding lit white candles and a white floral bouquet.

Caputo finally walked out in sky-high sparkly Christian Louboutins and a flouncy dress to thunderous applause. She briefed the audience about what to expect, counseling us to please accept anything we could connect to our lives as messages to us from our departed loved ones from “beyond the physical world.” She said she couldn’t stress it enough, and she was true to her word, as she continuously reminded the audience throughout the next two and a half hours to interpret her words as direct messages, especially if she failed to address each of us individually.

“It’s so nice to be home,” the Hicksville mom told the Westbury audience. “Everybody understands my accent!”

The audience laughed in recognition as she enunciated words like “feather’ and “father” as “feath-ah” and “fath-ah.”

Caputo announced that she wasn’t out to prove anything to anybody or to make anyone believe in mediums, echoing a sentiment she’d expressed when I’d interviewed her over the phone a few days earlier. She explained that she was there to validate for us all the feelings that, essentially, there was more to life than life. If we’d thought that maybe we’d seen the shadow of someone who’d died in the halls of our homes, we had. If we could have sworn we heard the voice of our dead mothers, or had been visited in our dreams by loved ones who’d passed, we weren’t crazy.

“It’s real,” she reiterated, over and over, throughout the “experience.”

And then she was ready to get started. A team with microphones and video cameras flanked her every move, anticipating to whom she would speak, and transmitting their faces on screens to the whole audience so that we could all watch the magic up-close. She approached a section in the front of the stage, asking, “Who connects with a brother figure?”

Two people immediately raised their hands. She told them that the fact that she was channeling the souls of their brothers meant that those souls were at peace.

“Do you understand that?” she asked, an oft-repeated refrain throughout the night.

Caputo moved on to a man who said he had lost his wife to Alzheimer’s disease. She told him that she saw the woman jumping up and down, symbolizing that she was free in the afterlife, no longer bedridden.

“She doesn’t have Alzheimer’s anymore, do you understand?”

Caputo asked a well-dressed woman wearing a pink button-down blouse how she could connect with the color mauve. She told the audience that she was seeing a woman in a mauve-colored suit or jacket. The woman nodded, saying that her mother had been an executive secretary. She was sure, she said, that she must have had a mauve suit at some point. But she wasn’t sure.

It didn’t seem certain that the mother’s fashion sense matched that of her daughter.

Caputo moved on, peppering the audience with questions like, “Why am I connecting with a mother figure over here?” and “How does the number three connect?”

Hands shot up all over the theater and Caputo made busy work climbing the steep aisle ramps in her stiletto heels. Her husband Larry, easy to spot as a frequent co-star on her show Long Island Medium, lurked along the edges of the crowd, moving around.

Caputo made quite a few direct hits, like when she asked a man, “Did you mother work in fashion?” to which he replied, “She was a seamstress.”

“Perfect!” was Caputo’s reply when it seemed she made an exact match. It was her version of “Bingo!”

Clearly emboldened, Caputo continued, making some more specific claims, like, “I have a young woman who is telling me she was shot by her boyfriend or spouse.”

Three audience members stood to claim that soul as their own, which perhaps says more about the issue of rampant gun violence than it does about psychic ability.

Caputo stood on the round stage, looking up into the audience. She walked over to a section she hadn’t been in yet and started talking to a young woman who was sitting beside her mother. The woman had lost her uncle and had come for some closure.

“Why do I feel like he drowned?” she asked, clutching her chest. She relayed that she felt fluid rising in her chest, and that this was the spirit communicating how he’d died.

The niece shook her head no. That wasn’t her uncle.

Caputo insisted, refusing to move, saying that the spirit was instructing her that the person he wanted to connect with was there. She questioned the surrounding people, asking again about a drowning.

Then she announced that she wanted to speak with the mother of a young child who had drowned in a backyard pool during a party.

The audience gasped in both horror and delight. This is what we had come to see.

Yet no one seemed to fit the bill. A woman said that she lost someone who had drowned in river runoff, in about seven feet of water, and she wondered how, as the deceased stood about 6-foot-4. Caputo shook her head. That wasn’t who she was looking for.

She approached the woman with the dead uncle again.

“My uncle had a boat?” she offered.

“He built pools,” the woman said, pointing to her mother. “He built her pool.”

That wasn’t it, either. Finally the mother told Caputo and the audience that when he had died (of pancreatic cancer), his lungs had filled up with fluid.

The doubt that had started to creep into my mind early on in the show now made a full-court press. I wasn’t buying it, any of it.

Caputo threw out more questions to the audience, asking specific questions that, when they weren’t met with nods of agreement, became described as merely symbols of other, more general things.

For example, she asked a grieving mother who had lost her grown son, “Why do I feel like you are holding him when he died?”

When the woman shrugged, Caputo quickly covered by saying that that means he believes that she was always there for him.

“Do you smell him?” Caputo questioned another.

When there was no response, she immediately clarified that this meant that it seemed as if that person was still there, even though he had passed some time ago.

Caputo told a woman who was mourning her mother that she was seeing “red spots all over her body.” But the woman stated that her mother had had ALS. When Caputo said, “I don’t know,” the woman clarified, “Lou Gehrig’s disease.”

Caputo nodded. A debilitating disease all over the body. Perfect, she said.

Caputo told a woman who seemed quite obviously gay that her father approved of her lifestyle, did she understand?

She seemed annoyed when a woman answered the question about a “father-figure” with the fact that he was her uncle.

She approached a mother and son and began to talk with them about the man’s brother. She hit on a few questions, like when she asked if he wore a religious medallion in honor of the brother and the man produced it right there, from under his shirt. Then she asked what the number three meant to him, and he responded that he had a 3-year-old daughter.

“I Googled that!” she wise-cracked to the crowd in self-congratulation, a wink and a nod to allegations that she and her staff research details about audience members in anticipation of her shows, only to produce them later as part of the psychic act.

As the session wound down, Caputo continued in the same vein, joking with the audience, her signature Lawn Guyland-ese carrying over NYCB Theatre. The people seated around us, and up onscreen, dotted their red-rimmed eyes with tissues fished out of pocketbooks, while still others exited the theater before the performance ended. The reviews, it seemed, were mixed.

After the show, Caputo announced that two lucky audience members had been randomly chosen to meet her backstage. I had been lucky enough to have been given meet-and-greet passes as well, so I waited along with perhaps 20 or so other people after the show ended for the chance to meet Caputo in person.

She emerged from backstage, her outfit changed from the dress to a black jumpsuit, the Louboutins mercifully gone. She chatted with small groups as her staff brought them to her, one by one.

When it was our turn to meet her, I introduced myself as a reporter from the Press, and reminded her that we had spoken a few days before.

“I hope you enjoyed the experience,” she told me. “It was a lovely article, I appreciate it very much.”

I took the opportunity to ask if she ever came into contact with spirits who were not at peace and that if the souls she encountered were in Heaven, did she ever speak to those who were in the opposing resting place?

“I don’t channel those souls,” she said, flat-out. “I only channel souls that walk in God’s white light.”

Then she said to me something oddly curious.

“You know, the first two people that just came? The one girl—it was a mother and daughter—and she said the kid that drowned in the backyard at the pool party? She said, ‘That was my son, I just couldn’t even speak.’”

“She says, ‘I want to thank you because he died many years ago at a pool party.’ She left, she’s like, ‘You have no idea. You changed my life.’ It’s amazing,” continued Caputo.

Amazing coincidence indeed that this particular woman had possessed one of the few backstage passes. Perhaps even more so—and pretty convenient, too, I’d say—that Caputo was able to relay this conversation to a reporter who’d witnessed what had seemed to be a pretty big miss earlier.

Was this an incredible coincidence or merely an attempt at damage control?

For me, this unbelievable experience was simply that: not to be believed. In my humble opinion, Caputo is a damn good performer, and she’s got undeniably likeable sass and charisma.

I just don’t think she speaks with the dead. Or she didn’t the night that I saw her.

But my father probably could have told you that.