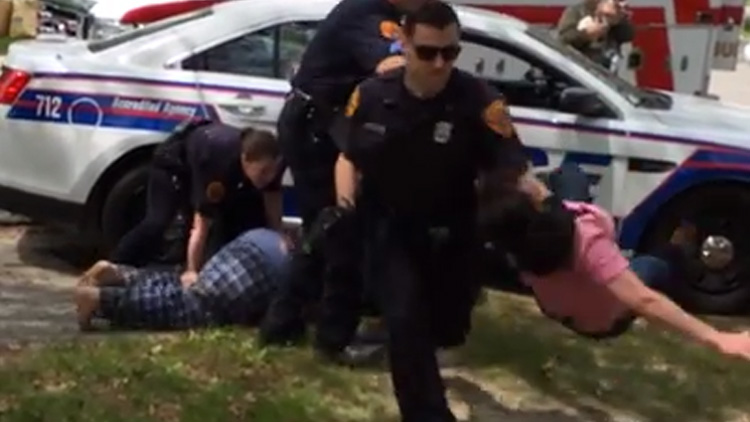 A screengrab of a Suffolk County police officer body slamming a woman in a video filmed by a Center Moriches man who claims that he was falsely arrested for videotaping the incident.

Police charged Thomas Demint with obstruction of governmental administration and resisting arrest following the incident on May 21, 2014, officials said. Kenneth Mollins, Demint’s Hauppauge-based attorney, released the video to the media, claiming his client was arrested simply for filming the arrests of a woman and her two sons, one of whom is a friend of Demint’s. At a news conference held at his laywer’s office, Demint said he was passing by when he stopped to film the encounter.

“I wasn’t there to expose anybody or to make anybody look bad,” Demint told reporters, according to WABC-TV. “I was there because these cops were really being violent with them.”

The attorney said that he intends to file a notice of claim, the first step in suing the government, once the criminal case against his client is concluded—but Demint is refusing to take a plea. He is due back in court Sept. 15.

“We are proceeding to trial,” said Robert Clifford, a spokesman for Suffolk County District Attorney Thomas Spota, when asked if prosecutors are considering dropping the charges against Demint in light of the allegations.

Mollins claimed that his client was arrested after filming the 6-minute-long video that captured police officers using a stun gun on the woman who appears to lose consciousness. Then, when the video shows another officer choking one of her sons, the woman tries to come to his aid, before another officer slammed her to the ground, again rendering her motionless before she was also handcuffed.

What happened after Demint stopped filming is what Mollins is alleging violated his client’s rights. Mollins claimed that three “overly aggressive” officers tackled Demint as he walked away, took his cell phone out of his pocket, allegedly said that “we’ll take care of this video”–and deleted the wrong video.

Mollins also claimed that Demint was later pulled over by police and had his phone confiscated for six weeks. Meanwhile, Demint had already downloaded the incriminating video onto another device.

“He was afraid to come forward with it,” the lawyer said.

Police released a statement countering Demint’s claims, which they say they also plan to investigate. Officers had responded to a report of a suicidal man when the scuffle broke out, both police and DeMint’s lawyer said.

“Thomas Demint interfered with officers by shouting obscenities toward police officers and paramedics as well as entering the scene several times after he was told not to,” police said in a statement. “Mr. Demint’s actions diverted officers’ attention away from the suicidal man, and Mr. Demint had to be physically escorted away from the scene.”

This case is not the first time Suffolk police have been accused of improperly dealing with people videotaping officers on duty. A Suffolk police sergeant arrested a photojournalist filming a crash scene four years ago, prompting the cameraman to sue the department. Police settled that suit for $200,000 last year, ordered officers to be retrained in dealing with the press and were ordered by the court to form a committee to improve relations with the media.

“The Suffolk County Police Department respects the civil rights of all members of the public,” police added in their statement in response to Demint’s allegations. “These rights extend to bystanders at police scenes; however, bystanders must not interfere with police operations or create a safety risk to the public. Bystanders may record video as long as they do not enter restricted areas, interfere with police operations, violate any laws or compromise the safety of officers.”