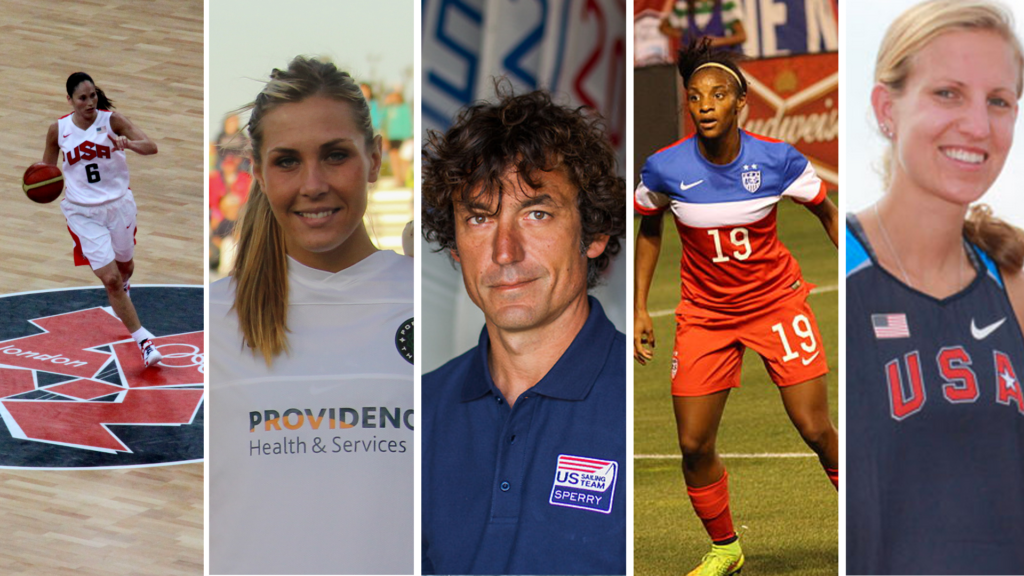 Five athletes with Long Island ties are among 11,000 from around the world competing for their chance to take home a gold medal in the Rio 2016 Olympic Games, which officially starts Friday.

“Since I was 10 years old, I’ve dreamed of being an Olympian,” Michta-Coffey told the Press last month. “If someone had told me, here’s your wish, make your life how you want… I don’t know that I could have made as good a wish as what’s actually happened.”

Representing the United States in Rio will be 555 of the nation’s most disciplined athletes. Among them are 292 women—the most women to compete for a single country in Olympic history, according to the U.S Olympic committee.

The local athletes described getting to represent their country on the world stage as a privilege. But it’s not easy. Training for the every-four-year’s Olympic Games consumes the lives of its participants. For four years at a time, Olympic hopefuls devote their lives to wearing the colors of their respective nations.

For those who do get the call—now the hard work really begins. The goal is to win gold or medal in the athletes’ respective events. It’s a goal that U.S. Olympians have evidently taken seriously; The United States has won 2,189 medals at the Summer Games, more than any other country, according to the International Olympic Committee.

“As New Yorkers, we are proud of all of our Olympic athletes and their extraordinary perseverance and strength.” Gov. Andrew Cuomo said in a statement. “At a time when our country wrestles with division and intolerance, we are unified in our admiration of the achievements of these athletes. The Olympics provide more than gold and glory; they remind us of the strength of our diversity and the triumph of the human spirit.”

Thirty New Yorkers will be competing in Rio. Having one homegrown Long Island Olympian among them is impressive. But five? That’s downright awesome.

Syosset native Sue Bird has had success on every basketball court she’s stepped foot on. In Rio, Bird will be going for her fourth gold medal in as many tries.

Perhaps the most impressive aspect of Bird’s professional career is her success in international play. If she wins her fourth Olympic gold medal, Bird stands to join an illustrious list in the basketball world.

“It’s incredible,” Bird told the Press after practicing at the New York Knicks training facility in Tarrytown last week shortly before departing for Rio. Just like she has her entire basketball career, Bird distributed the glory to her teammates. “I think it says even more that there are three or four others on this current team who also have a shot at that this year,” she said

Bird, who was born and raised in Syosset, remained in Syosset public schools until her junior year of high school, when she transferred to Christ the King High School in Queens. Her experiences through high school undoubtedly helped shape the person, and the player, Bird has become.

“I had lived and gone to Syosset schools my entire life, with that comes all your friends, everything you know is all in that one place,” Bird recalled. “To leave all of that, being the new kid in school, that part was really hard.

“I was really lucky to have a lot of my AAU teammates already playing at Christ the King,” she continued. “Immediately I had friends to help me out.”

And so Bird’s winning ways began. At Christ the King, she established herself on the watch list of top Division 1 programs such as Stanford, Vanderbilt and the University of Connecticut. In her senior year, Bird led Christ the King to a State Championship and the National Title.

Upon graduation, Bird chose to attend UConn. That’s where Bird established herself as a household name in women’s basketball, joining head coach Geno Auriemma and a recruiting class that was touted as the best the country had ever seen at the time.

During Bird’s tenure at UConn, the Huskies won two National Championships with an astonishing aggregate record of 114-4. The personal accolades came in bunches, too. Most notably, Bird was awarded the Naismith trophy, recognizing her as college player of the year during her senior year as she led the Huskies to an undefeated season.

Bird, a point guard, entered the WBNA draft in 2002, and was taken first overall by the Seattle Storm. She’s had an illustrious career that includes over half a dozen All Star selections. And now she’s vying for a fourth gold medal to add to her trophy case.

Crystal Dunn is one of several younger soccer players who will get their first shot at Olympic gold for the US Women’s National Team (USWNT).

Dunn, 24, is a graduate of Rockville Centre’s Southside High School. At Southside and everywhere she’s been since then, Dunn has dominated. She’s achieved numerous personal accolades, including New York State Player of the Year, and the praise of her peers.

“One thing that Crystal has proven is that she’s been a winner at every single level,” former USWNT defender Kate Markgraf told The Huffington Post. “I first saw her at the U-20 World Cup, and she was the MVP for me. You watch her in college and she’s dominating at forward. She’s a match winner, at every single level she’s played at.”

One thing is for sure, Dunn can beat opponents in many ways. Her primary attribute is her speed. As a forward, her ability to get around defenders and create chaos from the flank is second to none. Dunn uses her speed to dart into crowded areas around the net and pounces on loose balls. As a high schooler Dunn scored 46 goals and notched 35 assists in three varsity seasons.

Like all great athletes, Dunn had to undergo some adversity before she could really take off. She was the last player cut from the 2015 USWNT that won the World Cup in Canada last summer.

“I’d never felt this way and I kind of had to teach myself how to respond,” Dunn wrote in an op-ed published in The Players Tribune. “I suddenly had to figure out how to get used to failure, because up until that point, success was all I ever knew.”

That’s easier said than done for an athlete when on-field dominance is something that’s been ingrained in them from an early age.

“In 2015, I was coming off a collegiate career at North Carolina during which I had won a national title and the Hermann Trophy as the country’s best player.” Dunn wrote. “I had also won a World Cup with the U-20 team and earned a handful of caps with the senior squad. So when I showed up to training camp for the national team last January, I was confident.”

Now after years of hard work, Dunn will be representing Long Island for the USWNT in Rio. She’ll be playing a big role in the hunt for the team’s fourth-straight Olympic gold medal.

The road to Rio for Northport native Allie Long hasn’t been such a smooth ride. The 28-year-old midfielder for the US women’s soccer team was on the cusp of being an international regular for some time, but she couldn’t seem to catch a break.

Her first game as a member of the USWNT came and went. It was a friendly against Team Canada in Winnipeg. In the two years following that short taste of international play, Long watched the USWNT from afar. She wasn’t called to play in the 2015 FIFA world cup, or in either of the team’s two major tournaments earlier this year. Naturally, doubt began to creep in.

“I remember looking back and having days when I would just be thinking, ‘Is this ever going to happen?” Long said on the team’s website. “I was working so hard and I was frustrated.”

After an off-season of training unlike any she’d had before, Long’s hard work paid off in the form of an invite back to USWNT camp in March. By April, she was back on the field. Long started in a game against Columbia and scored the first two goals of her international career in that match.

She is now fixed into place as a regular on the USWNT, and expectations are higher than ever for both the ladies’ national squad and Long herself. Like Bird and the US women’s basketball team, the USWNT will be gunning for their fourth-straight Olympic gold medal.

From the turf at Northport High to the pitch in Rio, Long’s journey has been fulfilling as any. During her time at Northport High School she was a four-year varsity player, and her team never lost a regular season game. Long was the Suffolk County Player of the Year in her junior and senior seasons.

She spent time at both Penn State and the University of North Carolina. She’s been a winner no matter what program she’s played for. But medaling in Rio would be the biggest notch on her belt yet.

“[Winning gold] would mean everything,” Long said. “I have thought about it, obviously, and I feel like all of the hard work, the times that I’ve struggled have led me to this.”

Two-time Olympian Maria Michta-Coffey has been an elite performer both in the athletic arena and in the classroom from a young age.

Thirty-year-old Michta-Coffey graduated from Sachem High School, where she was a national track and field standout. In the classroom, Michta-Coffey was perhaps even more impressive.

After graduating high school in 2004, and missing her graduation ceremony for the junior race walk nationals, Michta-Coffey enrolled at LIU Post, where she earned her bachelors in biology. She graduated with a 4.0 GPA—her class’s valedictorian. Michta-Coffey then moved on to graduate school, attending the Icahn School of Medicine at Mount Sinai, where she earned a Ph.D. in Biomedical Sciences.

Her performance on the athletic side of things has earned her a trip to Rio, where she’ll be competing among the world’s very best race walkers for a chance to medal at the Olympics.

Michta-Coffey is where she is now due in large part to a tireless work ethic and setting both short-term and long-term goals. Her academic status in conjunction with a jam packed training regimen proves this.

She’s at the top of her game, making strides in the bio-medical field while keeping another high end goal in mind: to be the best race walker she could be. This culminated in an Olympic bid when she qualified for her first trip to the Olympic games in London, during the summer of 2012. She said it’s a dream that couldn’t have come true without her Long Island-based support system.

“To see my family here, to see my high school and race walk coaches… It’s really special to see these guys here,” Michta Coffey said. “When I’m racing, I’m racing with you guys and for you guys. Nothing I’ve ever accomplished has been done on my own… [family, coaches and friends] have been there every step of the way.”

Bora Gulari is a skipper on the U.S Olympic sailing team. Originally born in Istanbul Turkey, Gulari moved with his family to Long Island when he was a child as his parents did their post-doctoral work at Stony Brook University.

Gulari was introduced to windsurfing by his parents at age 4. He later moved to Michigan. It wasn’t until he graduated from the University of Michigan that he took up sailing.

In Rio, he’ll be competing in the two-person mixed multi-hull event with his teammate, Louisa Chafee, daughter of ex-Rhode Island Gov. Lincoln Chafee, on their Nacra 17, a high-speed catamaran.

“I’m proud to represent my country, I feel like the hard work has just begun,” Gulari said. “My heart might flutter a little bit, but it will mean a lot. I’m really proud.”

How many of LI’s five Olympians will bring home the gold? Stay tuned.