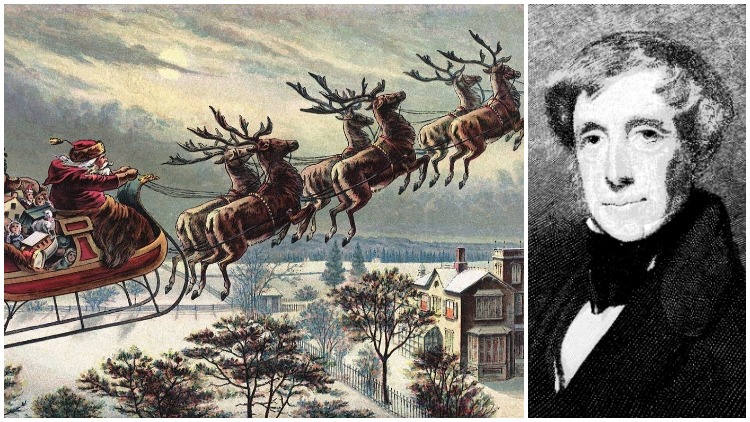 For nearly two centuries, Santa Claus has been a plump, jovial, good-hearted soul who travels worldwide in a sleigh pulled high above the rooftops by magical flying reindeer. Each Christmas, when this wise old elf flies over the Northeast, perhaps he gives a nod to the Long Island neighborhood where his iconic image was said to have originated: the Moore Homestead Playground, originally called Elmhurst Playground.

Before Nassau County was formed in 1899, that neighborhood, today’s Elmhurst, was originally called Newtown. The wealthy Moore family had established their 1660s farmhouse and acreage there. In 1779, Clement Clarke Moore was born at the family’s Chelsea estate; he spent many Christmases in Elmurst, which many historians believe it was the setting for his classic 1822 poem A Visit From St. Nicholas (popularly known by its first line,’Twas the Night Before Christmas). But while readers praise the inventive revamp of its central character, Moore’s own character may not be as admirable as that of his creation.

SANTA GETS A MAKEOVER

Moore attended Columbia College (now Columbia University) and become a scholar of the literature of the ancient Greeks and other civilizations. The expert in Dutch folklore mixed myth and reality to come up with a memorable tale of Santa Claus’ epic journey. The poem’s merry, generous Santa was unlike the real Saint Nicholas, the ancient Christian bishop who told children to live disciplined lives and gave only occasional gifts.

On Christmas Eve in 1822, Moore was going to buy a turkey to donate to the poor. As he rode in a sleigh through Greenwich Village’s snow-covered streets, he began writing a poem for his six children. Some say his image of Santa Claus was inspired by the sleigh’s bearded driver, by a local Dutch tradesman, by the first governor of New Netherland (now New York and New Jersey), or by Moore’s portly neighbor. Others say that Moore’s black slave drove the sleigh.

Other modern-day observers speculate that many of the poem’s concepts (like the Dutch reindeer names) were lifted from earlier work by Moore’s friend Washington Irving. In 1809 in Diedrich Knickerbocker’s History of New York, Irving wrote how St. Nicholas advised a sage then “laying his finger beside his nose, gave a very significant look, then mounting his wagon, he returned over the treetops and disappeared.”

A friend of the Moores sent the poem to the Troy Sentinel newspaper. It was published anonymously in 1823; Moore did not claim credit until 1837. He was seen as a grumpy parent whose other poetry urged his children to be humble and refuse transient delights. Did he really pen the light-hearted verse? He did not publish it under his name until 1844, wanting to be revered as the author of a scholarly Hebrew dictionary. Instead he became famous for a work he referred to as a ‘trifle.”

A controversy erupted around 1900 when the descendants of Major Henry Livingston Jr., a Dutch Hudson Valley gentleman farmer and poet, claimed that Livingston was the poet. In 1919 the Dutchess County Historical Society ruled that a comparing the poem with Livingston’s verses “adds internal evidence supporting the correctness of the family’s position.”

The truth? In 2000, the Encyclopaedia Brittannica wrote that many scholars concluded that computer-aided analysis “showed that it had more in common with poetry written by Livingston than with poetry by Moore.”

Santa and his reindeer may never reveal the truth about who really invented them — but that won’t stop children everywhere from reciting “Now, Dasher! Now Dancer! Now Prancer and Vixen!…”