Tales of The Ghosts of Grey Gardens 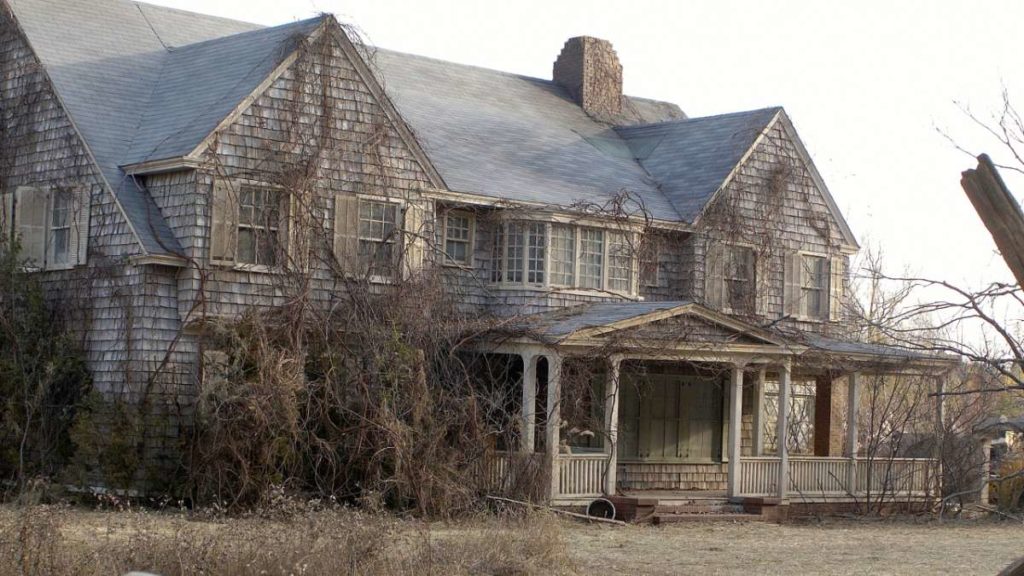 In the dark of night, in a sprawling mansion just a block from the Atlantic Ocean, a woman in her prime awaited her sea captain lover’s return. At the stroke of midnight, he climbed a ladder to her upstairs bedroom, and they did what lovers do.

The seafarer had built the mansion where they romanced in 1905 on Long Island’s South Shore on Lily Pond Lane. She, a prominent socialite and model who sought show business fame, insisted that the visits did occur at the East Hampton estate, repeating the story throughout her life, until her 2002 death.

But there was a problem: The night visitor she said she had the affair with had died, and his ghost was said to haunt the mansion. And other spirits have appeared ever since he first set afterlife foot in the house. Dubbed “the Witch House,” its ghostly visitors show no signs of leaving.

“ROMANCE, GHOSTS, AND OTHER THINGS”

The woman recalling the visits was Edith Bouvier Beale (“Little Edie”). Ever the aspiring entertainer, she performed memorably in the 1975 award-winning cinema verité documentary about her home, Grey Gardens.

“Meet a mother and daughter, high-society dropouts … managing to thrive together amid the decay and disorder …” is how Little Edie and her mother, Edith Ewing Bouvier Beale (“Big Edie”), are described on imdb.com.

In the production, filmed when Big Edie was in her 80s and Little Edie was in her 50s, the younger Beale said her home was “oozing with romance, ghosts, and other things.” She lived there for 25 years, caring for her mother, the pair surrounded by dozens of feral and domesticated cats plus possums and raccoons in a flea-infested, crumbling eyesore, smack dab in the middle of the ultrawealthy Hamptons.

Before the Beales bought the mansion in 1923, former owner Anna Gilman Hill, a famed horticulturist, poured her heart into beautifying the land. She imported concrete from Spain to shield pale-flowered plantings from the forceful Atlantic winds and sea spray. Hill wrote that she named the estate “Grey Gardens” because of the “soft gray of the dunes, cement walls and sea mists.”

Hill’s ghost likely haunted the Beales after witnessing the deterioration of the property she had beautified. As Big Edie and Little Edie aged, they had neither the financial reserves nor emotional stability to keep things up. The climbing, overgrown plants obscured the garden walls. The raccoons’ claws punctured the roof. The cat feces piled up and warped the floors.

In the mid-1950s, the Beales hired a local man, Tom “Tex” Logan, to maintain the estate. Known as a drinker, he would leave town for months. After his final excursion in 1964, he died of pneumonia in the mansion’s kitchen.

His ghost’s drunken staggering was competing with the stomping boots of the sea captain’s spirit in 1971, when Logan’s successor, Jerry Torre, started working there. He later told PhillyVoice.com, “There’s a spirit in the mansion …. I felt a person in the kitchen with me.”

Big Edie told Torre that it was the anniversary of Logan’s death. “And he died on the Army cot that you sleep on,” she added. Gail Sheehy, the bestselling author of Passages, lived near the Beales in 1971. As she wrote in New York Magazine, her 7-year-old daughter saw a light at night in an upstairs window of the decaying house surrounded by growling cats. The child named the place “the Witch House.”

In 1979, several years after Big Edie died, journalist Sally Quinn and her husband Ben Bradlee, famed Washington Post editor, bought the property. They promised the Beales they would renovate the mansion to use as a summer house, ignoring the haunted-house gossip. No problem: Bradlee said of his wife, “She’s a witch,” because she believed in spirits and read tarot cards in a cottage on the property.

Quinn told cnbc.com that she saw an apparition in her bedroom at night, one of two ghosts in residence. The ghost of Little Edie, who died in 2002, was a regular.

Every night around 9:30, Quinn said, the hall lights would flicker once. Guests heard noises, including Sen. Barry Goldwater, who wouldn’t sleep in Little Edie’s room, cautioning, “There’s a ghost in there.”

Quinn observed, “Some people think it’s a man, clomping around in boots. I’m pretty sure it’s the sea captain.”

A PACT WITH THE DEPARTED

Quinn and Bradlee made good on their promise with an extensive renovation. They viewed the ghosts as benign, especially one in particular who claimed to be Big Edie’s best friend. As Quinn told the New York Post, the apparition appeared from out of nowhere.

“Big Edie sent me,” she said, though Big Edie was dead. “She wants you to know she is very happy you bought the house, and she will oversee everything. You will be very happy here.”