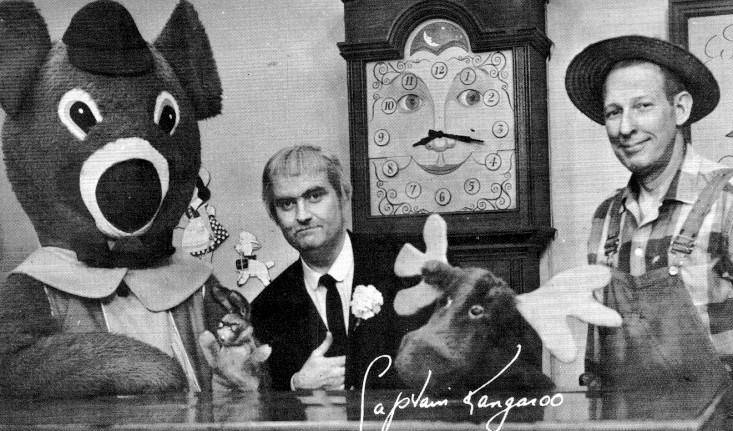 One never knows where life’s early influences may lead. Before we had today’s internet to answer our questions, we would harness our imagination if we wanted to create, educate, or entertain. No one could have predicted that a boy who was interested in live dramas, romances, thrillers, and other 1940s audio entertainment would find success by clowning around and producing original plays.

That boy was Lynbrook, Long Island native Robert James Keeshan, who got encouragement — from parents who listened and a teacher who praised his nice voice and suggested he work in radio — that propelled him into a career as a world-famous television actor, producer, recording artist, and author. His creations were an eclectic mix of slapstick, animation, costumed characters, puppets, music, a sad-faced and silent clown, and celebrities, all gathered around America’s favorite grandfather: Captain Kangaroo.

Keeshan was born in 1927 in Lynbrook; When he was 6, his family moved to Forest Hills, Queens. He displayed early chutzpah at Forest Hills High School, broadcasting his plays over the loudspeaker system. As a senior, in 1944, he worked nights as a page, seating radio program audiences, earning $13.50 a week at NBC Studios in Rockefeller Center.

Months later, NBC asked him to create a new show, Time for Fun, built around the soft-spoken Corny the Clown. Keeshan next appeared as the grandfatherly host of Tinker’s Workshop, which beat out The Today Show in the ratings.

But Keeshan was bothered by the commercials, which he saw as violent or featuring products he viewed as inappropriate for children. He told CBS’ 48 Hours, “On commercial television, their problems are solved with a karate chop,” and lobbied successfully to reduce the violence. CBS asked him to develop a show.

Captain Kangaroo debuted in October 1955, the same day as Walt Disney’s Mickey Mouse Club. Keeshan told Variety, “I was impressed with the potential positive relationship between grandparents and grandchildren, so I chose an elderly character.” The kindly host with the bobbed wig and walrus mustache got his name from the pouchlike pockets on his jacket.

As reported by The New York Times’ Richard Severo, Keeshan said to director Peter Birch that the goal was to talk to the child at home one on one during the program, with no studio audience.

“The children should never be excluded … and should never have the feeling of being part of an audience,” Keeshan told Birch. “The Captain” engaged children in a gentle, nonthreatening way: Show good manners. Respect animals and playmates. Celebrate “be kind to mothers and others day.”

Captain Kangaroo “introduced millions of children to the notion of civility,” wrote The Baltimore Sun’s David Zurawik. “The emphasis was on kindness, not glitz.”

Keeshan commuted to Manhattan after moving to Melbury Road in Babylon on Long Island, taking the 4:20 a.m. train to arrive by 6 a.m. His show featured celebrity guests and he appeared on Mister Rogers’ Neighborhood and Sonny and Cher’s Christmas Special.

But fame did not rule his life. He served on the boards of the West Islip School District and Good Samaritan Hospital in West Islip, and supported the Suffolk County Police Athletic League, Boy Scouts of America, and many other charitable organizations. Observers described the children’s advocate as completely reachable, generous, and dedicated to the community.

When not starring on Captain Kangaroo, recording vinyl albums, or serving the community, Keeshan spent time with his family of five, indulged in his photography hobby, studied French, played golf, sailed and fished on Long Island Sound, and dug in the garden surrounding his 24-room colonial house. When asked by The New York Times how he had time for all this, he replied, ”One of the big secrets of finding time is not to watch television.’’