This gated home in Water Mill North with many luxurious amenities is the perfect retreat for anyone looking since it is back on the market, this time for $5.995 million with Craig Beem of Beem Hamptons. The home is linked to at least one person who actually used it to retreat — the controversial rapper 6ix9ine.

6ix9ine, whose real name is Daniel Hernandez, is known for his rainbow-colored hair and facial tattoos and used to go by the name Tekashi69 — if you don’t know, his name is now pronounced simply “six nine.” He was released from prison at the start of the COVID-19 pandemic to serve out the remainder of a sentence under home confinement. He first moved into a modest home in Lido Beach. When a neighbor outed his location, he was forced to move — after all, he had received a lesser sentence by signing a plea agreement that indicated his willingness to testify against fellow gang members.

At the time, it was reported he moved to 24 Deer Run in Water Mill, an 8,500-square-foot home overlooking an equestrian estate and tree farm. A collection of pastel-colored luxury cars in the driveway may have given it away. The custom home, built in 2005, was listed for rent at the time for $55,000. 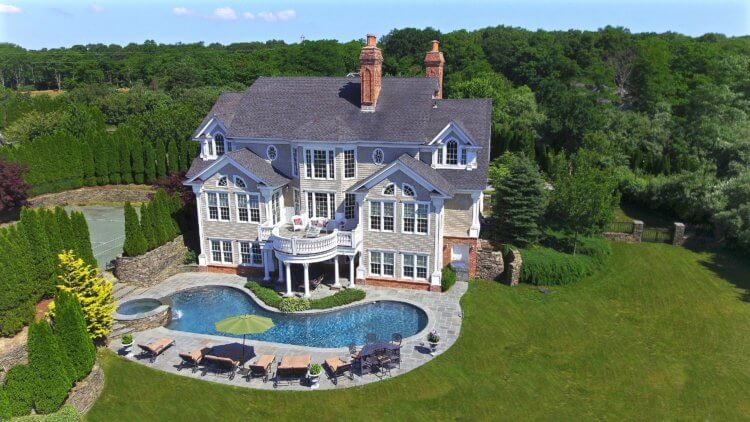 The home sold in October 2021 for $4.2 million, according to records. Now it’s back on the market, asking $5.995 million, which still seems like a steal since neighboring houses are listed at $7.5 million.

The traditional abode boasts a bit of old-world charm while offering luxurious amenities and exquisite craftsmanship. “Every inch of the home was designed and constructed with comfort in mind and impeccably maintained by its owner,” the listing says.

There are five fireplaces spread over three stories. The living room enjoys soaring high ceilings, and natural light pours in through large windows. A chef’s kitchen offers polished granite countertops and stainless steel appliances. There is a breakfast room off the kitchen and a separate dining room that seats 12.

There are six ensuite bedrooms, several with raised-hearth fireplaces that give the home a warm feel. There is even an ocean view from the second floor.

The walkout lower level includes exposed brick and reclaimed barn wood. There is a sauna, a wine cellar, a family room, a pool room, a movie theater and a speakeasy-style bar.

The 1.1-acre property includes a backyard entertainer’s paradise featuring a free-form heated pool with a raised Jacuzzi and a waterfall flowing into the pool, covered patios and an outdoor surround sound system. There is also an all-weather tennis court.

In addition, there is a detached three-car garage — one that 6ix9ine did not use for his fleet of cars, leading to the discovery that he was briefly hiding out here nearly two years ago. Not a bad place to retreat to, that’s for sure!