The Blame Game: Who Is At Fault for NIFA’s Takeover of Nassau County Finances?

By Spencer Rumsey and Chris Twarowski, with Timothy Bolger
comments
Posted on February 10, 2011 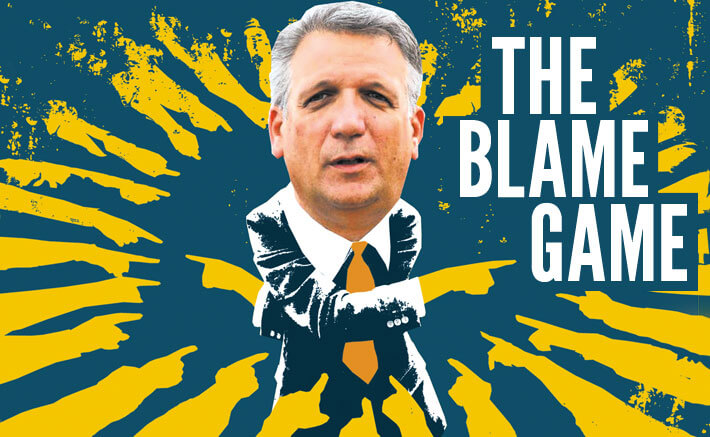 After the NIFA takeover vote, the county executive and the presiding officer fired back, challenging the board’s powers and the board members’ ethics. Their lawsuit, filed Jan. 31, says the imposition was “arbitrary and capricious” and “unconstitutional.” At a press conference earlier in the day, Presiding Officer Schmitt detailed why he believes the six directors are “ethically challenged” and vowed to haul them individually before the legislature’s rules committee to “investigate” their motives, considering that “most NIFA board members have previous relationships with the County through business transactions or former County Executive Tom Suozzi…”

Before the day was done, Patrick Foye, Deputy Nassau County Executive for Economic Development, put in his resignation, lambasting the “smears” of the NIFA board that he called “reprehensible” and criticizing the lawsuit that “will be costly, very likely will fail, and most importantly, win or lose, will add nothing to a long-term solution of the county’s many woes.”

Mangano replaced Foye with Joseph Kearney, head of the Nassau County Industrial Development Authority, who lives in Nassau, assures Nevin, but who Kentucky land records document as also owning a horse farm in Kentucky with his wife. Meanwhile, in light of these developments, NIFA extended its deadline for the county to submit its 2011 financial plan from Feb. 15 to Feb. 22.

Oral arguments for the lawsuit are set to begin Feb. 18. The county has retained the services of Rivkin, Radler, Mangano’s former law firm. NIFA has been consulting with Judith Kaye, the former chief judge of the New York Court of Appeals, now part of the Manhattan-based law firm Skadden, Arps, Slate, Meagher & Flom LLP.

“I am not concerned whether NIFA is politically motivated or bipartisan,” Mangano said this week. “What concerns me is that the architects of Nassau’s budget mess are now acting as its watchdog.  After all, NIFA sat idle for many years as the former county executive increased property taxes, spent lavishly and negotiated unaffordable labor contracts that have driven Nassau into a fiscal abyss.  NIFA suddenly awoke in January 2010 when I took office.”

Yatauro countered that argument. “NIFA is composed of free-thinking business leaders who want to save the county from further fiscal stress,” she tells the Press. “NIFA was just as critical, just as penetrating in its analysis, with the Suozzi administration as it is now. The only differences are that we are currently living under a much dire economic climate than we did a few years ago, and that the Suozzi administration always managed to give NIFA confidence in its budgets by placing believable contingencies in their financial plans. So, if revenue expectations were not realized, Suozzi had in place viable alternatives. The Mangano administration placed all their hopes for a balanced budget on union concessions which they failed to obtain.”

Presiding Officer Schmitt criticized NIFA for using Skadden, Arps, which he called “one of the most, if not the most expensive, law firms in the country.”

“The difference between Skadden, Arps and Rivkin, Radler is that even Peter Schmitt can’t make the claim that Skadden, Arps is connected to anybody. Rivkin, Radler most certainly is. That’s the firm Ed Mangano came out of and I’m sure when he loses his office in three years, that’s where he’ll go back to.”

“If you’re anticipating that you may have a court case that could go all the way to the Court of Appeals,” says Lawrence C. Levy, executive dean of Hofstra University’s National Center for Suburban Studies, “what would be better than having the former chief judge?”

Desmond Ryan, a self-described conservative Republican, says it’s obvious how we got here.

“NIFA made it very clear early on that the budget wasn’t balanced,” he says. “They have a mandate from the state to step in when they deem their actions to be appropriate, and they have subsequently responded to that mandate.”

Ryan didn’t think much of the handful of Nassau County Tea Party groups who issued a press release last week condemning NIFA’s vote as a “shameless political ploy to discredit Ed Mangano and his administration.”

“Tell me who in that Tea Party is a certified public accountant?” he quips. “At the end of the day, figures don’t lie, but liars figure. That’s the bottom line on all of this.”