Penguins Rape and Kill Each Other? 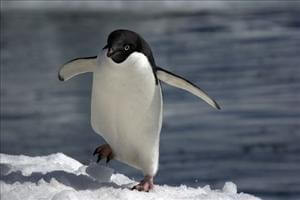 You know those cute and cuddly looking tuxedo penguins that we all love, they’re actually quite deceptive, a study says.

Young male penguins are so sexually depraved they will rape their chicks and try to have sex with dead females, according to the Guardian.

The study has been a secret for 100 years. British scientist George Murray Levick observed the Adélie penguins when he was on an Antarctic expedition from 1910-1913. According to his reports he observed necrophilia, murder, and rape, but the editors were so offended by his reports of sexual depravity in penguins that they removed the disturbing observations.

There was another paper written, Sexual Habits of the Adélie Penguin, but it was only read by experts.

But Levick’s paper has now been published in its entirety, and the sexual habits of the Adélie “hooligan” males that “annoy” other penguins “by their constant acts of depravity,” as Levick said, have been exposed.

Douglas Russell, who works as a bird curator at the Natural History Museum published Levick’s work in the Polar Record.

“The pamphlet, declined for publication with the official Scott expedition reports, commented on the frequency of sexual activity, auto-erotic behaviour, and seemingly aberrant behaviour of young unpaired males and females, including necrophilia, sexual coercion, sexual and physical abuse of chicks and homosexual behaviour,” Russell said in an analysis he wrote with colleagues. “His observations were, however, accurate, valid and, with the benefit of hindsight, deserving of publication.”

He explains the penguins have barely any time to breed, rare social interaction, and do not understand cues well.

“For example, a dead penguin, lying with its eyes half-open, is very similar in appearance to a compliant female,” he said. “The result is the so-called necrophilia that Levick witnessed and which so disgusted him.”