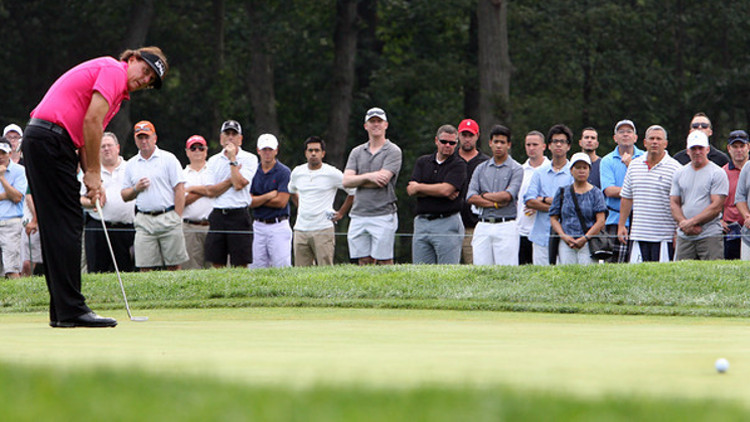 Spectators flocked to Bethpage Black in forces for the opening round of The Barclays professional golf tournament on Thursday.

It was as beautiful a day for golf as you’ll get in the dead of summer. Just enough breeze to keep everyone comfortable, and not a cloud in the sky for most of the morning at Bethpage State Park. Among those in attendance were golf fans of all ages—including some youngsters who were pumped to get their first chance at watching the pros up close.

“It’s so cool here, my favorite golfer is Jason Day, well and Dustin Johnson,” 9-year-old Kyle Kurjiaka enthusiastically told the Press as Day and Johnson’s group made its way through the 15th hole.

Golf’s horizons have expanded, as has its following, which seemingly gains in popularity every time the sport makes a stop on the Island. It’s something the PGA has recognized, as four more events have been scheduled at Bethpage Black, a public course, through 2027, including the PGA Championship in 2019.

“It’s his first year playing, so we figured we’d come out and get an appreciation for it, get a feel for Bethpage Black,” Plainview native Brian Powers said on behalf of his grandson, as he watched a Lucas Glover tee shot in awe. “It’s terrific here.”

Seated atop golf’s pinnacle are Aussie Jason Day, 23-year-old phenome Jordan Spieth, and five-time major champion and fan favorite Phil Mickelson. For sure, Long Island loves its golf—and those who make the sport what it is.

Mickelson is no stranger to Bethpage Black. He’s played in each of the three tournaments that the Black has hosted, which includes two second place finishes at the US Open in ’02 and ’09.

As Mickelson was staring down an approach shot, the result of a shanked drive on the outskirts of the 16th hole, spectators relished the chance to come within feet of the world’s 13th ranked golfer.

“Phil, you need to go left of the pin here,” one spectator whispered as Mickelson sized up his shot. “I agree,” Mickelson replied with a smirk.

And as 1 p.m. approached, anticipation for the aforementioned Spieth’s Bethpage premier did, too. He walked to the tee box and was serenaded by fans chanting his name.

Spieth’s Bethpage Black christening is one of the main storylines of the weekend. At 23, Spieth has won two majors, came within inches of winning a third at the Masters in 2015 and is the reigning FedEx Cup champion.

For Spieth, a win at Bethpage Black, which he said was “up there with the hardest, probably, top five courses I’ve ever played in my life,” would be another notch in his already impressive belt.

Judging by his following on the course Thursday, the fans wouldn’t mind seeing that result.