By Stephanie Perrone
comments
Posted on May 16, 2018 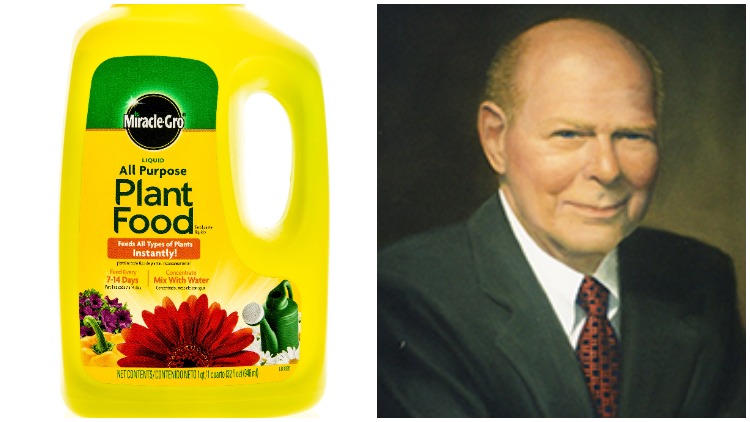 A half century ago, Horace Hagedorn and his business partners sowed the seeds of a water-soluble plant food that would make gardens grow big and healthy — a product now known as Miracle-Gro.

The advertising executive from Sands Point was approached by Otto Stern, who sought advice about marketing, when they hatched the idea to form a fertilizer company. They hired a well-known Rutgers professor, O. Wesley Davidson, to formulate it. The widely advertised plant food was so popular that in 1995, it merged with Scotts Corporation to become Scotts Miracle-Gro Company.

He sought to clarify confusion created because the Scotts name was seriously marketed. But the majority of the company’s stock was held by the leaders of MiracleGro.

Before that move, Hagedorn bought out Stern in the 1980s and plowed ahead. His widely advertised TV commercials later cemented the company as a nationally known brand. Because Hagedorn had worked in advertising, he knew how to make a personal pitch about his product and get people more interested.

Hagedorn credited the name of the product to his first wife, Peggy. Besides having a catchy name, the liquid fertilizer proved successful because of its ability to help weak plants receive nutrients quickly, and the fact that it is less likely to burn plants. The company sells formulas specifically for tomatoes, roses, trees, shrubs, and houseplants.

Hagedorn retired in 1997 and became a full-time philanthropist. His son, Jim Hagedorn, became chairman, CEO and president of the Scotts Company.

Some of Hagedorn’s personal earnings from the sale were donated to Hofstra University’s school of education and Adelphi University’s business school, both of which were named after Hagedorn. They are just some of the many philanthropic contributions by the nonprofit Hagedorn Foundation.

Although he passed away in 2005 at his Sands Point home, Hagedorn’s success with Miracle-Gro lives on.