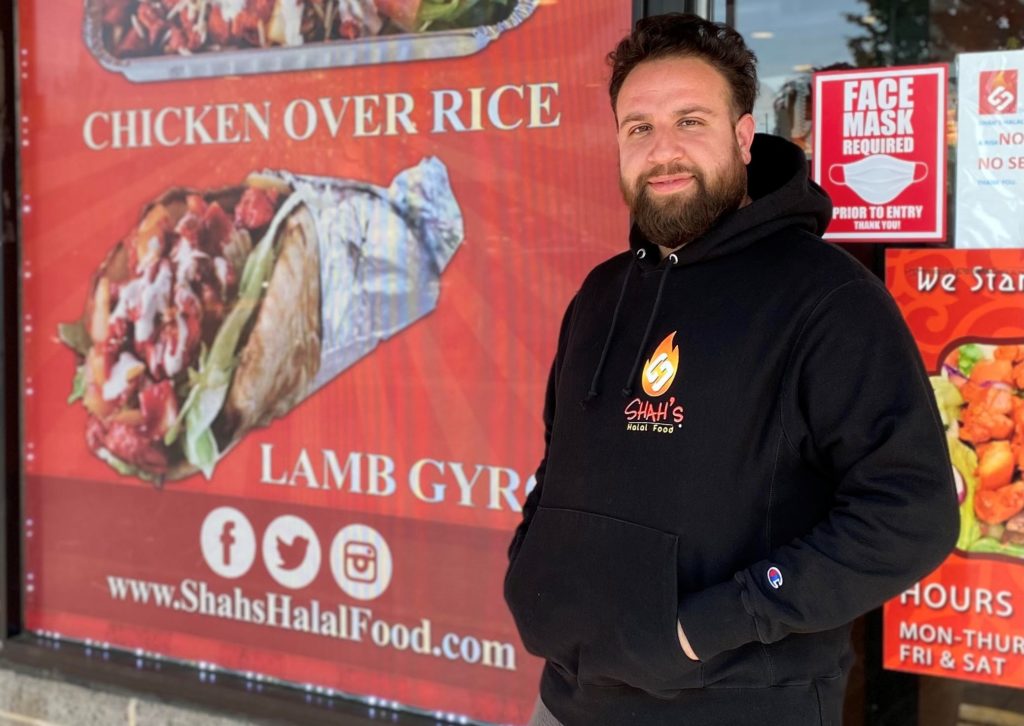 For fans of food cart halal food, the question, “Hot sauce and white sauce?” has become as commonplace as, “Would you like fries with that?”

And, that’s part of the plan for Khalid Mashriqi, the CEO of the fast-growing Shah’s Halal Food, whose long-term goal is to become “the McDonald’s of halal.”

But, given the company’s current quick rate of expansion, it’s a goal that might just be in reach.

The Arabic term “halal” refers generally to the specific permissible method of slaughtering animals in accordance with Islamic law.

The company was started by Mashriqi’s father Ibrahim and two business partners, Shafiq Mashriqi and Rahimullah Mashriqi. Nearly 60 percent of Shah’s corporate staff is made up of family members.

Khalid, now 37, came to the U.S. with his family from Afghanistan in the early 1980s. Since 2016, he has taken over all business operations.

“We started this business in 2005, with just a single food cart on 121st Street and Liberty Avenue in Richmond Hill, Queens,” he says. “We prepared all the foods at home, using a small kitchen and a garage, at first. Everything kicked off from there,” he says, adding, “We opened one and then another … until we arrived at where we are today.”

Today, the company boasts 17 storefront locations across Long Island and two more on the way in Freeport and Stony Brook, as well as a network of both branded and unbranded food carts across New York City. Other locations include Connecticut, Massachusetts, New Jersey and California. Abroad there is also a United Kingdom operation with several food trucks operating under contract with the London transit system.

Khalid, who graduated from Queens College with a degree in political science, says he had an “entrepreneurial mind” from early on. He spearheaded the branding of Shah’s Halal with the opening of storefront spots in 2016.

Although most stores are now corporate owned, Khalid says “interest is high in franchises” and Shah’s plans to offer franchises soon.

The price point is going to be affordable, he says, possibly in the $20,000 to 25,000 range up front, and then an ongoing percentage of store profits.

Competition for halal fast-food consumers continues to grow across LI and beyond. Research firm Technavio says the U.S. halal market will grow by $8 billion through the end of 2024, fueled primarily by a rising U.S. Muslim population.

However, Khalid says that most of his customers are non-Muslim and that most like the freshness of his food and the unique tastes.

“From my experience, people also like the transparency of halal products and they also say they can actually taste a difference in the meat (this is what non-Muslims have told me over the years), and they like that there is a process that involves really understanding what is in the food’s ingredients and byproducts,” says Yvonne Maffei, author of My Halal Kitchen: Global Recipes, Cooking Tips and Lifestyle Inspiration.

Maffei, who also pens a blog on halal cooking, has lectured about how the halal industry looks at ingredients through a food-science eye, remaining ever vigilant for doubtful or non-halal elements in things like breads, yogurt, or apple juice. “People find the process fascinating.”

Among Shah’s most popular dishes are the signature chicken and rice platter and gyros, which are core menu items in addition to chicken sandwiches, Philly cheesesteaks, hot wings, and burgers.

All of Shah’s food is prepared in its own U.S. Department of Agriculture facility in Jamaica, Mashriqi says.

Even on LI there are now numerous purveyors of halal-style fare, from The Halal Brothers of New York in Floral Park to The Halal Guys in East Meadow. But Khalid says the difference is the food and how it’s prepared, using a superior brand of halal chicken and consistently marinating it with a unique blend of spices that competitors don’t use.

He adds that all of Shah’s sauces, from the popular white sauce to red and green hot sauces, are made from scratch.

Moreover, he says that he likely supplies about 80 to 90 percent of all the other halal operations on Long Island.

Asked if he is concerned about increasing competition, Khalid says he’s confident in his product.

“We’re our greatest competition,” he says, noting that Shah’s is going up against the big guys.

Looking ahead, Khalid envisions Shah’s locations across the country. “We’re definitely going nationwide with this, it’s just a matter of time,” he says, adding that the company has been steadily regrouping since Covid and solidifying its operations. He also plans to bring his special brand of halal to the United Arab Emirates.

“All of the UAE is halal, but what differentiates us is our food. Nobody has our food, that’s what it comes down to. Our sauces, how everything is prepared … no one has it.”