By Spencer Rumsey Posted on December 3, 2014 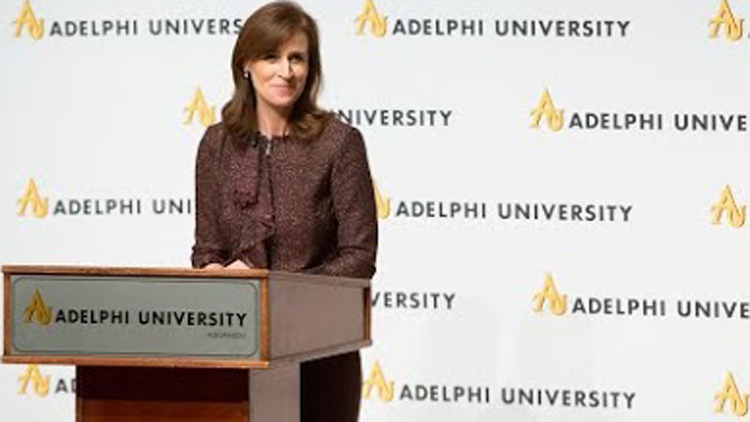 Christine Riordan, the provost of the University of Kentucky, will become the first woman to be the president of Adelphi University in the 118-year history of the Garden City-based private liberal arts institution of higher learning

She is set to take office in July as Adephi’s 10th president after Robert A. Scott, who’s led the university since 2000, steps down, the board of trustees announced Tuesday. The news was greeted with a standing ovation in the auditorium of the university’s Performing Arts Center, where Robert Willumstad, chairman of the board and head of the search committee, praised her accomplishments and spoke glowingly about her promising future at Adelphi.

“Her presidency is a significant moment in our history as she prepares to serve as our first woman president,” Willumstad said. “And the board looks forward to working in partnership with her to sustain Adelphi’s progress.”

Currently, Riordan helps oversee a campus with more than 30,000 students, 19,000 full- and part-time employees and a budget of $3 billion in Lexington, Kentucky. Prior to that post, she was the dean of the Daniels College of Business at the University of Denver, a private college with more than 11,000 students.

With an enrollment of almost 8,000 students, Adelphi University, chartered in 1896, is a nationally ranked, doctoral research university with undergraduate and graduate degrees as well as professional and educational programs for adults.

“I believe in the things we can do as a university together!” she told the audience. “I know the future is very bright.”

She cited the “unique combination of liberal arts, the professional schools, the health care-related fields, and certainly the sciences” as contributing significantly to Adelphi’s draw.

“I think Adelphi University is a hidden gem!” she said. “I think it should probably be a household name as one of those schools that is a destination point. I want to make sure that Adelphi is a name that’s known around the country and around the world as a world-class institution.”

The first time she came out to the Island, she told the Press, she was in her 20s, and was working for AT&T in New Brunswick, N.J. Before the Adelphi University search committee had selected her—and before she had agreed to take the job—Riordan and her husband paid an incognito visit to the campus, wearing baseball caps and blue jeans, to check it out.

“I have to tell you I was very, very impressed,” she said, mentioning the lively spirit of the students and the parents she saw walking around that day. “That made us feel very comfortable and very welcome in a place that knows who it is.”

The decision of the search committee, comprised of nine trustees and five members of the Adelphi community including faculty and students, was unanimous, Willumstad told the audience, and the board had unanimously concurred.

“It’s been a labor of love,” he said of the months-long process that once had 125 candidates to consider. “We felt very strongly that we wanted to find the right person and I believe we have.”

Riordan is reportedly an internationally recognized expert on leadership development, diversity and inclusion, and team performance, having been interviewed by and written for the Financial Times, Harvard Business Review, Forbes and The Wall Street Journal, to name a few publications. She earned a Ph.D. and M.B.A. from Georgia State University and a bachelor of textile engineering degree from the Georgia Institute of Technology. She is married to Robert D. Gatewood, professor emeritus from the University of Georgia. They have two teenagers—a 15-year-old son and a 17-year-old daughter, plus a “very lovable bulldog named Georgia.”

Her dog, she told the appreciative audience, “sometimes tests my leadership skills.”